By Sarah Portlock on March 4, 2009 5:52 pm in Development, Landmark Preservation 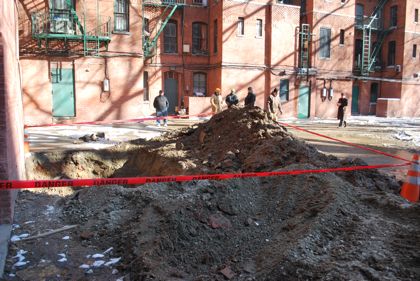 Loud, earth-shattering deconstruction work started today in the courtyard of the Riverside houses as part of a plan to build an underground garage there — that is, scoping work for the project.

“We’re doing work in anticipation of the project,” explained a man who said he represented the building’s owner. The buildings sit on Joralemon Street, between Columbia Place and Furman Street.

Crews and big front-end loaders were out on Wednesday, digging holes on either end of the courtyard to investigate how they should construct the hotly-contested garages, one worker said. They are investigating pipe layouts and how they will have to support the 118-year-old building’s foundations. The holes will then be filled in once the scoping work is done.

The building’s owner, Joel Weiner, received city approval in November to build out the 90-car garage underneath the courtyard, and top it with a garden. But that was after the city rejected the first idea, which was a two-story, 134-car aboveground garage.

The change in plans was all it took to convince the Landmarks Preservation Commission to approve the project, agency spokeswoman Lisi de Bourbon had told The Brooklyn Paper.