By brooklynheightsblog on June 24, 2014 10:47 pm in Arts and Entertainment, Brooklyn Heights, Sports

In a weekend of exciting World Cup action, the United States squandered a brilliant chance to advance from the “Group of Death,” yielding a late goal in extra time to allow Portugal a 2-2 tie on Sunday, one day after a thrilling 2-2 draw between Germany and Ghana.

Both results set up an exciting finish to Group G play this Thursday as the U.S. will face Germany while Portugal will play Ghana, with all four teams in contention for the Cup’s knockout phase.

Your reporter was on the road Saturday for Germany-Ghana, the tournament’s most exciting match (thus far). Nanny O’Brien’s, a lively neighborhood pub on Connecticut Street in Washington D.C., was filled with US fans curious to see how Germany—a favorite to become the first-ever European side to win the Cup on South American soil—measured up against a Ghana eleven that dropped a heart-breaking 2-1 decision to America.

Many in the bar cheered loudly as underdog Ghana pushed Germany all over the field, taking a 2-1 lead on Asamoah Gyan’s goal in the 63rd minute. However Miroslav Klose rescued his country with an opportunistic tally in the 71st minute. Klose’s 15th goal in Cup competition ties him with former Brazil star Ronaldo for the most in Cup history.

The unexpected Germany – Ghana result left the US in an enviable position going into Sunday’s match-up: win against Portugal and advance to the round of 16 for a second consecutive Cup, an accomplishment unprecedented in American football.

Eager to watch, your corespondent simply could not secure a reliable signal on the Amtrak Metroliner traveling from Washington. Desperately switching between WiFi and cellular connections, updates from ESPN’s iPhone app were spotty with only audio with occasional grainy images available over vast stretches of the Northeast . 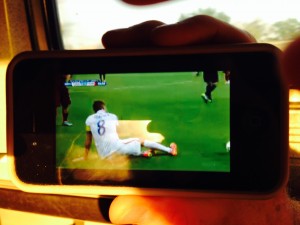 Given significant delay between televised coverage and ESPN’s cellular feed, texts from friends would pop up in advance of my audio, eliminating any suspense.

The US was down 1-0 early on a colossal blunder by defender Geoff Cameron. Luckily I missed Nani’s quick strike in the opening minutes which put the Yanks in the hole, but Jermaine Jones’ second half equalizer came in loud an clear: “THANK YOU JONES!!!!” texted Phillipe of Brooklyn.

When Clint Dempsey put USA ahead at the 81st minute, my joy was hard to contain, though silence was necessary in the hushed environs of the Metroliner’s library car.

Then came a nerve-racking wait. As the clock ticked down—with intermittent audio and video—my hope was that Stars and Stripes could hang on for a first ever-Cup win when surrendering the first goal.

A defensive breakdown in the 94th minute allowed Portugal’s Christian Ronaldo, considered the world’s best player, one final chance. He seized it, delivering a perfect ball to teammate Silvestre Varela, who headed the ball past American netminder Tim Howard to keep alive Portugal’s hopes of advancing.

With a win and a draw (4 points) in its first two matches, the US is in a prime position to advance on Thursday, but Sunday’s missed opportunity left a bitter aftertaste.

Joe from Chapel Hill blamed the US’ Michael Bradley. “Bradley tonight against Portugal was a DISASTER. His give away at the end cost us the win!!!!!”

Phillipe echoed the anti-Bradley sentiment: “What a sickening letdown :-(. Bradley was the weak link in this last goal.”

One person relatively upbeat about the US – Portugal outcome was Red Davis, owner of The Custom House. With two matches played Thursday at noon, Davis’ pub is sure to be packed. All Custom House screens save one will show USA – Germany. The lone exception will monitor Ghana – Portugal.

“I see a draw,” said Davis, predicting that both US’ Jurgen Klinsmann and Germany’s Joachim Löw—Klinsmann’s former assistant—will be too cautious to risk losing. “Both teams know they’ll go through [with a tie].”