As the controversy heats up around housing in Brooklyn Bridge Park’s Pier 6, the NY Times wrote last week about how Mayor deBlasio has navigated that issue as well as the ongoing tension around Long Island College Hospital.

But leave it to us (read: Homer) to pick up on this tidbit from the article:

NYT: In the same part of the world, which is to say brownstone Brooklyn, where the city’s affections for Mr. de Blasio were incubated, there is also the mounting sense that he has reneged on promises to involve neighborhoods in decisions that intimately affect them. This stems largely from his enthusiasm for building high-rises in Brooklyn Bridge Park, in part to provide much-needed affordable housing. Laminated signs questioning the wisdom of this decision have appeared on trees all over Brooklyn Heights. The proposal for the development is a decade old, but as Daniel Squadron, the state senator representing the area, told me, “There was certainly hope with a new administration that this plan would be looked at anew.”

Whether you feel that housing the park ship has already sailed (i.e. “it was in the plan all along”) or believe that it needs to be re-thought (“times have changed”), many of us can agree that “laminated signs” on poles are irksome. The only saving grace — the one keeping us from going all Andrew Porter and David on Middagh on this one — is that the notices weren’t stapled to trees. 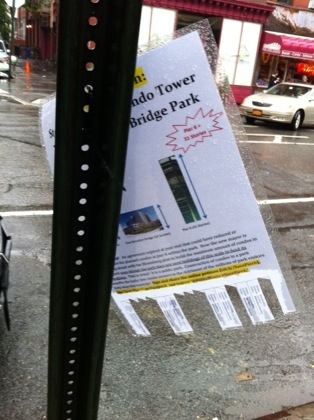