Unlike the issue he raised in 2010 about loose gravel at Pier 1 (now since tamped down by use as the park claimed it would be), the pathway near the art installation Dahn Vo: We the People at Pier 3 literally fought back.

T.K. explains below in this dispatch sent to park officials Sunday night:

On such a beautiful day, as today, May 25, 2014, it was perfectly logical to go out and explore the newly opened section of the Brooklyn Bridge Park near Pier 2. Overall, I was impressed with almost everything, and I appreciated that there was the inclusion of an accessible telescope in an excellent location on the Pier. Other than the glassed in skating area, in which a person in a wheelchair wouldn’t be able to see anything, I would give Brooklyn Bridge Park high marks for this recent expansion.

Subsequent to my excellent experience in and around Pier 2, I decided to head further south and explore the other newly opened area with the copper covered sculptures and this is where Brooklyn Bridge Park really dropped the ball and has much to be accountable. Apparently, in preparation for adding more of the dreaded “chip seal”, the park put down a layer of sticky tar, but didn’t complete the job of actually adding the surface material. Consequently, you have left to the public a smelly and sticky mess, which is now all over my wheelchair tires and ruining my carpet. In short, my apartment smells like a tar pit and it will take days to clean up this mess. This is not acceptable!

Maybe the park will argue that I should’ve seen this hazard and avoided it, but there was a wet area near Pier 2 and the sticky tar just looked like wet pavement. It wasn’t until I was pretty far into this toxic swamp that I realized that there was a problem. At that point, I asked a random person passing by whether the ground was sticky under his feet and he responded affirmatively. Specifically, I was in the narrow undulating pathway beneath the aforementioned sculptures and, in hindsight, it would’ve been better to turn around. However, I was more than halfway into that narrow strip and I had no idea that tar had been spread all the way up to the main pathway. All the while, I overheard people complaining about their shoes being ruined.

As a person with a disability, I’m pretty good at keeping a level head and figuring out how to get out of difficult situations. Rather than continuing along my roll down to Joralemon Street through the park, I immediately headed back north towards Pier 1 in search of dry gravel. My plan was to see if I could somehow roll this tar off of my tires. Then I traveled along Fulton Street and up Suicide Hill, zigzagging my way back to 55 Pierrepont St.. Altogether, it was easily more than 10 blocks, but as the attached photos clearly illustrate, the tar is still very much part of my wheelchair.

If it was just damaging my tires and making a mess in my apartment, that would be one thing, but when my building has just undergone and completed a major renovation and I am potentially damaging the common areas, the situation is that much more serious. Furthermore, immediately across the harbor from Pier 2 is my place of employment. I work for a healthcare company located at 120 Wall Street. We just moved into this office space last September and, under no circumstances, do I want to damage their property. My employer is a not-for-profit and can definitely not afford to pay for cleaning up the extra mess when I go into the office.

Suffice it to say, Brooklyn Bridge Park has some explaining to do…

UPDATE: The folks at Brooklyn Bridge Park have once again proven their ability to quickly respond and resolve issues. TK updates us on Facebook Monday night:

Wheelchair Cleanup Update: after sending out a number of emails concerning my sticky situation, this morning, the Brooklyn Bridge Park contacted me with a commitment to make things right. At first I was a bit skeptical, but I realized that I had to give them a chance. Within a few hours, two Brooklyn Bridge Park staff members were my apartment to look at the damage and begin the cleaning process. We went downstairs to the sidewalk and they cleaned my wheels for more than an hour. While this is not really how I wanted to spend my Memorial Day, I do appreciate their proactive response. There will be more cleaning and other details to work out, but I’m glad the matter is being handled seriously and quickly. The photo below shows that a great deal of the tar and gravel was removed. 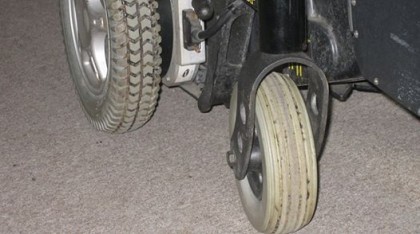