Yesterday morning Brooklyn Bridge Park President Regina Myer led a Jane’s Walk, one of over 100 walking tours held this weekend under the auspices of The Municipal Art Society of New York City. The purpose of this tour was to give a preview of two soon to open parts of the Park, the beach adjoining the ruined Pier 4 (photo, with Ms Myer), and Pier 2, which will house various athletic facilities. 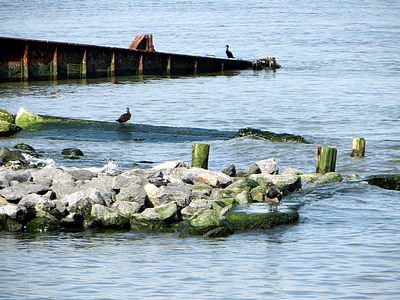 Sepaerated from the beach by a narrow channel is “Bird Island,” an artificial wildlife habitat made with riprap and soil. Plants will soon be added. As the photo sows, some birds are already enjoying it, and the ruined pier beyond. 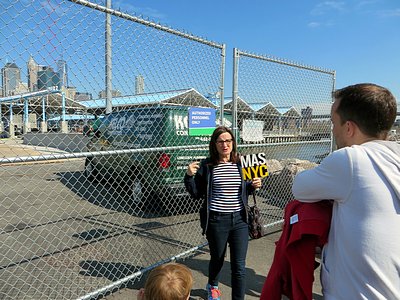 We headed north to the first of two bridges leading to Pier 2, where Ms Myer opened the gate after warning that we were entering an active construction area, and should stick together. The pier is connected to land by two bridges, one at its northern and the other at its southern side. These bridges cross a channel for use by kayakers. 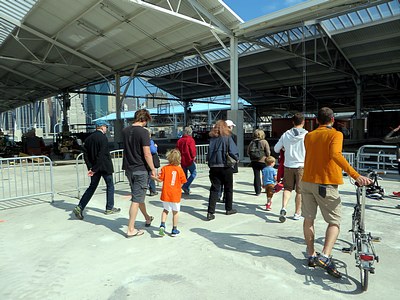 We proceeded onto the pier, crossing what will be shuffleboard courts.

There will be five basketball courts, two covered and three without roof. Workers were putting finishing touches on this goal. Note the swings beyond. 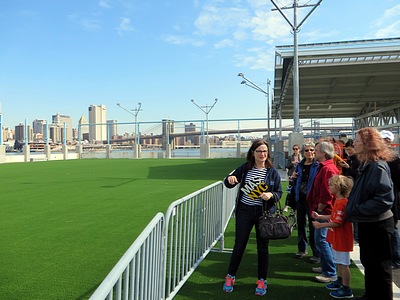 At the pier’s outer end is a half acre turf field, which can be used for pickup soccer or pther games, and will also serve as a venue for entertainment events.

This will be the roller rink. There are no plans at present for an ice rink, but this may come in the future. 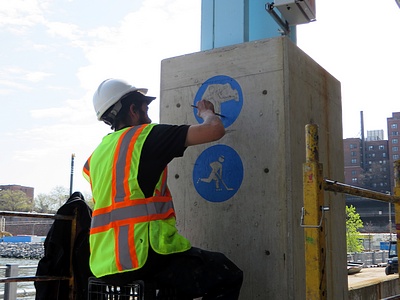 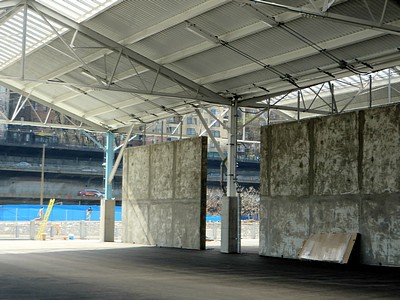 These will be handball courts. 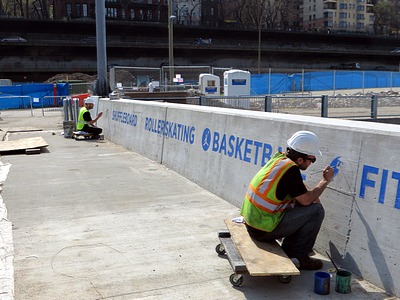 We leftthe pier by the northern bridge, where more painting was being done.

Ms Myser could not give a specific date for the opening of the beach or Pier 2, but said, “Soon.”

The Art of Brooklyn Film Festival May 7-11
Where Would You Tell a Friend on Jury Duty to Have Lunch in the Brooklyn Heights Area?