As I was taking my morning walk through Brooklyn Bridge Park, heading north from Pier 5 toward Pier 1, my nose crinkled at the smell of freshly laid asphalt. Rounding a corner in the path just south of Pier 3, I saw a group of people standing, facing south toward what will soon be a public beach on the shore facing the ruins of Pier 4. Speaking to them was a woman I recognized as the Park’s Senior Project Manager, Leigh Trucks (photo). Standing at the rear of the group was Brooklyn Bridge Park Corporation President Regina Myer, who invited me to stop and listen. 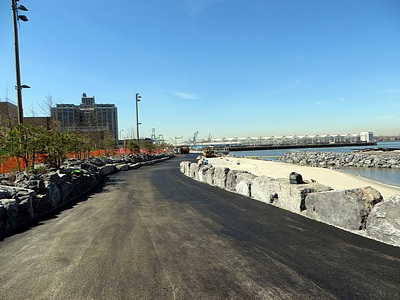 Leigh was explaining that the newly deposited asphalt was for a pedestrian path along the edge of the new beach, which can be seen to its right. 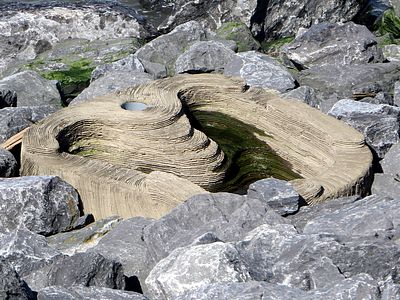 Leigh then pointed to a unique feature of the new beach area: one of four artificial tidal pools set in the rocks to the north of the beach. As the tide flows in, water will be conveyed to these pools through pipes. Along with this water will come some small forms of marine life, such as crab larvae, that typically thrive in natural tidal pools. These creatures may leave the pools with outgoing tide, and enrich the larger ecosystem.

This large piece of driftwood came along. Leigh said they decided to keep it. 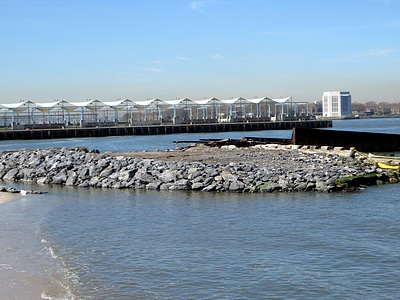 This small artificial island, separated from the beach by a narrow channel, will serve as a a habitat for birds and other wildlife, as will the ruins of Pier 4. The island will receive plants in the near future. 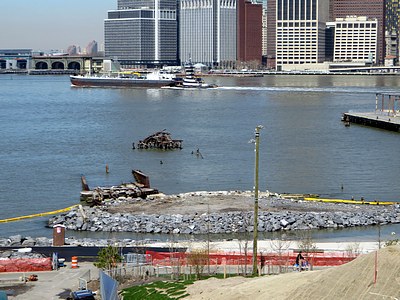 Here’s another view of the beach and island, and of the Pier 4 ruins beyond, taken from the Brooklyn Heights Promenade.

No opening date for the beach has yet been announced, but it will certainly be available for summer fun.