BHB Adopt A Pet: Her Name is Lola, and She’s a Showgirl… 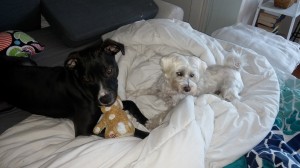 Lola (left) with her foster sibling

Snuggly Lola came from the same home that last month’s adoptable dog Bebe did: they were surrendered when their human was no longer able to take care of them.  Pulled from Animal Care and Control three months ago, both Lola and Bebe have been living in Heights foster care ever since.

Despite the strain of the last few months, Lola is an affectionate cuddler, says her foster mother Julia.

“She’s so affectionate,” said Julia. “She loves hugs and will sleep with you.”

This pit bull/whippet mix (she’s a “pippet) loves to run, swim and play, enjoying a morning jog with her caretaker. She’d make a great companion for someone who likes to be outside and who will let her expend some of her considerable outdoor energy.

Julia hastens to say that at home Lola is a pretty mellow dog who loves other canines; while she’s not aggressive with cats, she does like to chase them, which any cats in your household might not exactly appreciate.

“She tried to lick one of mine the other day,” said Julia, her foster mother.

One caution is that Lola doesn’t seem particularly fond of young children, though she gets along fine with teenagers.

She’s spayed and will be up to date on vaccinations at the time of adoption; a small adoption fee will be required to cover that cost.

Lola’s young and you could have each other…who could ask for more?  Contact Rocco and Jezebel on Pineapple Walk (718 855-8686) if you’re interested in adopting this lovey girl.

Lola’s former housemate Bebe still patiently awaits her forever home, as do the super-cute Pluto and Cosey.  For more adoptable pets, check out the other adoptable pets from the amazing folks at the Brooklyn Bridge Animal Welfare Coalition. 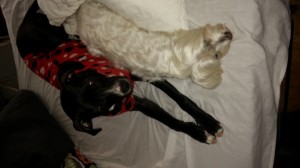 Last Minute Weekend Suggestions: Brooklyn Heights and Nearby
Karl Junkersfeld Checks in on the Progress of the Brooklyn Bridge Park Pierhouse Devolopment and Some Birds