By Homer Fink on February 20, 2014 1:44 pm in Arts and Entertainment, Commercial Real Estate

The saga of 70 Henry Street continues as Tom Caruana, owner of the building, has listed it for sale this week with real estate agency Massey Knakal. As the property is currently home to the Brooklyn Heights Cinema, the Cinema’s owner, Kenn Lowy, has issued this response which has also been posted at the movie theater:

To All our Supporters:

The short version –
We’re not going anywhere yet!

The longer version:
The landlord has become increasing frustrated because he cannot get his planned development approved by the city’s Landmark Preservation Commission. This is a plan that we wholehearted support. The plan includes the cinema.

Because of this he has decided to leave all of his options open, which includes selling the building and possibly leasing it to someone else at 4 times the rent we are paying. He has not given up trying to get a plan approved by the Landmark Preservation Commission (all options open). And we are still in that plan.

So the bottom line is that we are still here. But we can only continue with your support. If the landlord sees that the cinema is no longer viable, he could ask us to leave. He has told us we can stay until he is ready to move forward. It is important for everyone to understand that our landlord has been very supportive of the cinema.

Thanks for your continued support!

70 Henry Street, best known as the Brooklyn Heights Cinema, is the oldest and longest running independently owned and operated cinema remaining in New York City. The current tenant has a month-to-month lease and may be delivered vacant.

Perhaps Massey Knakel, or Mr. Caruana, hopes to attract a buyer who would maintain a space for the Cinema. The second sentence, though, seems to throw cold water on this notion. 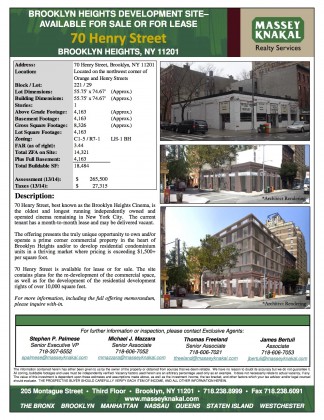 LICH Agreement “Within a Whisper”
Last Minute Weekend Suggestions: Brooklyn Heights and Nearby