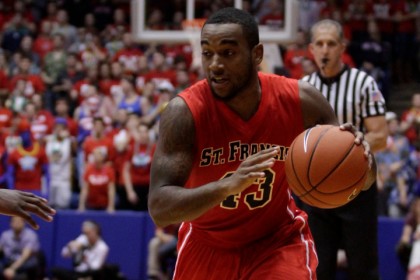 On Tuesday night at the Pope Center in downtown Brooklyn, with new allegations of criminal activity by one of their players plaguing the squad, the St. Francis Brooklyn’s men’s basketball team dropped a heart-breaking 73-71 decision to Central Connecticut State. Seconds after junior Brent Jones’ free throw following a steal from CCSU junior Kyle Vinales had given the Terriers a 71-70 lead, Vinales—the Blue Devils’ leading scorer— redeemed himself, dropping in a three-point bomb with as many seconds left to steal a victory for the visitors.

Jones, who tallied 13 points and six assists, had a chance to provide St. Francis with a huge boost after a week of uncertainty and dismay created by the temporary suspension on February 11 of multiple players, including junior P.J. Santavenere, sophomore Anthony White, Jones himself and freshman Wayne Martin. But Jones was able to sink only one of two from the charity strip, leaving the Blue Devils with an opening that Vinales seized.

With the revelation earlier in the day that St. Francis freshman Sheldon Hagigal had been arrested on sexual abuse charges in relation to an incident on February 5, Hagigal was found to be the unnamed fifth player that had been suspended from the squad.

St. Francis held the lead over CCSU until the game’s final minutes, at one point building a 10-point advantage. Senior Ben Mockford was sharp early from beyond the three-point line, hitting his first four attempts and six of nine from beyond the arc to lead the Terriers with 18 points. Junior Jalen Cannon chipped in with 16 points and a game-high 12 boards, but his missed free throw with 43 seconds remaining proved crucial.

“Their kid had a big-time shot to beat us” said St. Francis head coach Glenn Braica. Vinales’ basket dealt the Terriers (15-12; 6-6 NEC) their third straight defeat and dropped them into fifth place in the conference with four games to play.

CCSU (7-16; 5-7 NEC), now winners of five of eight contests, came in playing their best ball of the season, including a 74-73 win at Robert Morris two weeks ago when CCSU came from 18 points down to stun the Northeast Conference-leading Colonials.

As a result of their depleted roster, St. Francis was outscored 35-17 from the bench as the Blue Devils got eight points from freshman De Angelo Speech and 23 points from Vinales, who functions as a sixth-man catalyst for head coach Howie Dickenman.

Freshman point guard Yunus Hopkinson—third on the St. Francis depth chart—tried valiantly to fill in for Hagigal, but his two points were nowhere equal to what the Terriers typically receive from their absent guard, who with 8.7 points per game has been Braica’s best scoring option off the bench. Freshman Wayne Martin contributed eight points, three rebounds and two blocks in a supporting role.

Despite the loss, there was a bittersweet lining for St. Francis fans. The win cements CCSU’s position as the eighth and final qualifier for the upcoming NEC playoffs, knocking LIU Brooklyn—the Terriers’ arch-rivals—further behind in its quest for an increasingly unlikely fourth-straight NEC title.

After the game, St. Francis coach Braica was not thinking about the playoffs but simply how to rally the troops and motivate his team for a rematch on Saturday against Robert Morris on the Colonials’ home court.