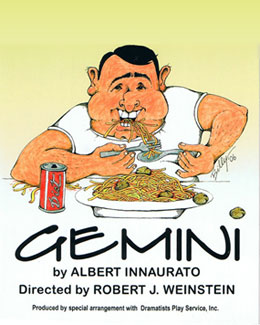 The Heights Players are currently performing their rendition of the seminal 1970s play, Gemini by Albert Innaurato.  Most New Yorkers, who were around at the time, have fond memories of the TV commercial for the original off Broadway production starring Danny Aiello, Kathleen Turner and Wayne Knight featuring the memorable lines "I'm not hungry, I'll just pick" and "it's going to be some party."  It went on to be one of Broadway's longest running plays, clocking in at 1778 performances.