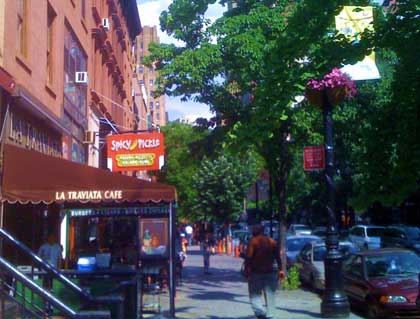 Commenter “Jonathan” tells us and BHB has confirmed that Spicy Pickle at 143 Montague Street has served its last tasty sammich.

The store opened to much fanfare last August 15 but had begun to telegraph its demise only six weeks after it opened.  Many BHB Community members had noticed that the eatery had eliminated its breakfast menu and truncated its business hours.   At that time, a spokesperson for the chain told BHB that the store was going through a “testing process” to see what would work at the new location.

According to Spicy Pickle’s  (not so rosy in general) corporate update released on February 11, the current economic climate may be to blame:

The New York franchisee is working on an agreement to terminate their tenancy and close the restaurant due to its proximity to the Wall Street financial district, and is looking to possibly transfer to another location on Long Island.

The Spicy Pickle moved into the space previously occupied by Armando’s Restaurant, known for its neon lobster sign.   BHB publisher Homer Fink tried valiantly but unsuccessfully to have the sign landmarked.