Battle for LICH is Not Over: Lawyer for BHA and Others

The Brooklyn Heights Association has sent us a letter from Jim Walden of Gibson Dunn LLP, attorney for the BHA and other petitioners opposing the closure of Long Island College Hospital. In it, Mr. Walden assures those concerned that even if, as expected, SUNY’s Board of Trustees votes to select an as yet unnamed party who would turn over most of the existing LICH campus to developers, retaining only non-hospital medical facilities, for further negotiations concerning the transfer of ownership of LICH, this will not be the end of the fight to preserve full scale hospital services in our community.

Update: Crain’s reports that the SUNY Board voted, 3-2, to proceed with the proposal of Fortis Property Group to develop the LICH site as a “medical mall” that would include ” an urgent care center, physical therapy facilities and office surgery,” along with residential condos.

Second update: evidently the Crain’s reporter jumped the gun; after the 3-2 vote by a committee of the Board of Trustees to proceed with the Fortis proposal, NY1 reports that the full Board voted to delay action until Mayor-Elect Bill de Blasio, whose support for keeping LICH open as a full service hospital is well known, takes office. The NY1 story includes this admission by SUNY Board chairman and former City Comptroller Carl McCall: “It was clear that this was something that was not going to be accepted by the community.” Thanks to readers Remsen Street Dweller and Rick for alerting us to this. 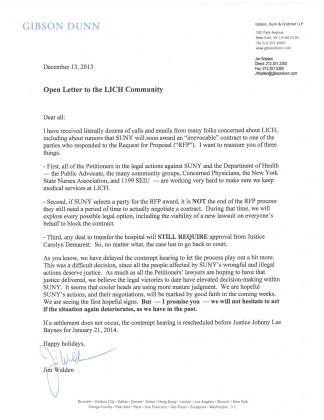 The full text of Mr. Walden’s letter is here