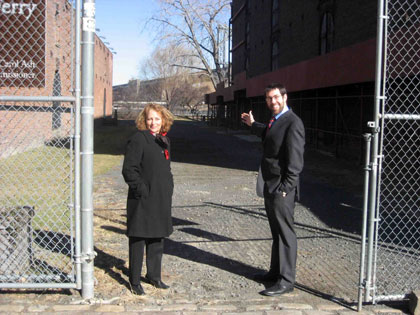 For almost a year, the main entrance to the Empire-Fulton Ferry State Park, at Water and Dock Streets in DUMBO, has been closed. This followed the discovery of a crack in the facade of the nineteenth century Empire Stores warehouse which adjoins the path near the main entrance. The facade has now been stabilized and, at the urging of State Senator Daniel Squadron (seen above at the Park entrance with Rachel Gordon, NYC Regional Director for the New York State Office of Parks, Recreation and Historic Preservation), the entrance is now open. Squadron’s press release follows the jump.

Brooklyn, NY—State Senator Daniel Squadron and Rachel Gordon, New York City Regional Director of the State Office of Parks, Recreation and Historic Preservation, announced today that the Dock Street entrance to Empire-Fulton Ferry State Park, long closed to neighborhood use, is now open to the public. The opening comes in response to a request from State Senator Squadron.

“This park is a great resource that should be as open and accessible as possible,” said State Senator Squadron. “Opening the Dock Street gate is one small step that will make a big difference for Brooklyn residents.”

“The Dock Street gate on Water Street has been closed pending the exterior stabilization of the Empire Stores,” said New York City Regional Director Rachel Gordon. “We are very pleased that as that has now been accomplished, the gate can be reopened. Two entrances are better than one.”