Concert by the Light of the Moon 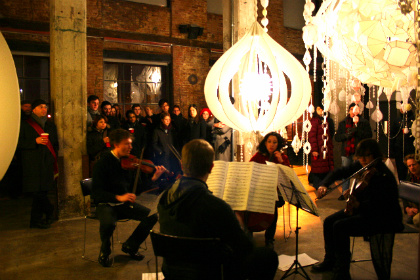 Last week, I attended Smack Mellon’s Press Play First Thursdays Series.  Scary cold outside, but the inside of their newly renovated space on the Brooklyn waterfront in DUMBO with ceilings that soar 35 feet— was impressive, stunning.  6,000 square feet with 25 windows on two levels spells panoramic views in any language.  Initially, the blinds were closed, and I thought, Hmm, that’s odd.  So I turned my attention to Kirsten Hassenfeld’s exhibit, Dans La Lune.

The atmosphere in the gallery was moody and dark, theatrical.  It seemed the only real light came from the sculptures themselves.  They looked like pagodas or snowflakes; architectural and complex, delicate, yet eccentrically scaled.  They were huge.  They  hung from the rafters on pieces of monofilament, holding up a constellation. Many of them were lit from within.  Gorgeous, like the light of the moon.

At 7:00 p.m., with a cold Kelso chocolate lager in hand to keep me warm, a woman raised the blinds.  The blue lights of the bridge and the river were now revealed, and the music began.  Line C3 is four percussionists, previously in residence at Julliard.  They were positioned alongside Hassenfeld’s exhibit.  They played a table top as if it were a piano.  I watched an intricate choreography of hands, fingers, knuckles— their instruments.  They scraped, tapped, knocked, clapped and even turning the pages of their score, became part of the concert.

Then the crowd moved to another location as a cellist began to play in a pool of light.  After her solo, three violinists joined her; all members of ACME (American Contemporary Music Ensemble). The music was hypnotic, lush, reminiscent of Philip Glass and the Kronos Quartet.    The overall aesthetic was a concert performed on the moon, by the light of the moon, on a cold, cold night.  The evening concluded with another piece by Line C3 in yet another area of the gallery.   When I left I promised myself that I would be back for the next in the series.  The marriage between music and art was sublime.