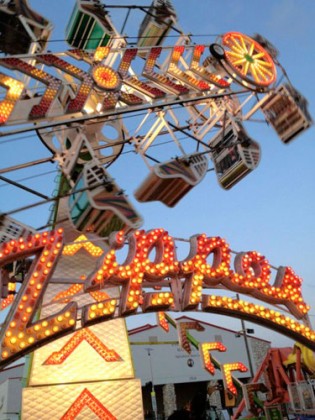 Zipper, a documentary about the fight to save Coney Island, opens at the IFC Center this Friday and runs through Thursday.

The film’s roots go back to director Amy Nicholson’s love of Coney Island, as it reminded her of her childhood spent near Ocean City, MD—a shore community full of people watchers, Def Leppard blaring from boom boxes, and ride operators calling, “You want to go … faster?!” But it was an article about the end of the Zipper ride that turned her from observer to investigator, delving into the politics behind the changing Coney Island. “I originally wanted to make a film that was an homage to Zipper,” Nicholson said. “But it bothered me that I didn’t understand why the ride was being taken away.” The film then grew into an exploration of the tug-of-war between those who wanted to turn Coney Island into what resembled a seaside Times Square—namely, Joe Sitt, CEO of Thor Equities—and those who strove to retain the park and community, good and bad … with both sides doing what they felt was best.

And while Sitt—a Brooklyn boy who grew up near Coney Island and who named Thor Equities after the Marvel Comics character—might be an easy target as the film’s villain, Nicholson says it’s not that easy. “I guess the villain is the process and the politics. But I don’t point to him as the bad guy. I don’t think he did Coney Island any favors, but I promised to treat him fairly, and I did. He doesn’t see anything wrong in what he did,” as shown in the scene where Sitt happily listed all retailers that he wanted to add, from a Ripley’s Believe It Or Not, to a Coldstone Creamery.

Zipper also stars a cast of characters from the neighborhood, including the ride operators themselves. According to Nicholson, “The guys who ran it could tell by the sound whether it was working well or not. It’s a contraption! And it was invented to make people scream. I interviewed the ride’s inventor, who said, ‘If people scream, it’s a good thing.'” Zipper the ride now resides in Honduras; to see Zipper the film, visit IFC Center’s site for screening dates and times.

Open Thread Wednesday 8/7/13
Pierson’s RBSCC Allegations Against Levin: Does He Strike A Chord Or A Brown Note?