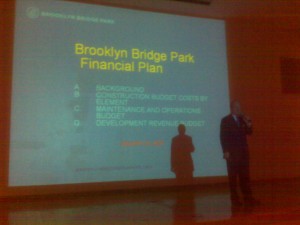 Brooklyn Bridge Park Development Corporation (BBPDC), the New York State government entity charged with designing and constructing the nascent Brooklyn Bridge Park, held a public meeting Wednesday night lasting over two and a half hours at a Polytechnic University auditorium in Metrotech to update the public on the park’s financial model for park construction and operation.

Both Senator Squadron and Councilman DeBlasio praised the meeting as a good first step towards better dialogue between the BBPDC and the public, and expressed expectations that as Brooklyn Bridge Park moves forward, the BBPDC will continue to communicate and cooperate with the surrounding communities. Some in the community have critized the BBPDC over the past few years for a lack of transparency regarding park financials and plans.

Regina Myer, BBPDC President, ran the meeting with her associate David Lowen, introduced as the VP of Real Estate. Both Myer and Lowen took the audience through a detailed presentation of current cost and revenue figures for park construction and maintenance.

The meeting presentation was professional. The BBPDC speakers went through the slide presentation quickly; however, based on the question and answer session that followed, those in the audience had few immediate problems with how the financials were calculated. Ms. Myer stated that an electronic copy of the presentation would be available on the BBPDCs website by January 30th, which is likely be closely scrutinized by elected officials and local park activists.

A park on the Brooklyn Heights/DUMBO waterfront has been much discussed and wished for in the community for many years. For the past 5 years the BBPDC, working with contractors, has prepared studies and detailed park designs and plans, cleared most of waterfront piers on the park site, and as of this month began construction of a limited portion of an overall park plan that will eventually stretch from Pier 6 on Atlantic Avenue to connect to the already completed Fulton Ferry State Park north of the Brooklyn Bridge. However funds are only currently available to build on Piers 1 and 6 and to connect the two with a narrow path.

The park has been a source of community controversy due to its unique funding arrangement where the ongoing maintenance budget for the park must be self-generating.  It would be the first public park in New York City that must fund its own ongoing maintenance.

The BBPDC has chosen to base most of this self-sustaining operating budget on revenues generated fron land rent and PILOTs (Payment in Lieu of Taxes) on over 1,000 luxury housing units located in the park site, including the already completed 1 Brooklyn Bridge Park condo development (formerly known as 360 Furman St) and two planned apartment towers on Pier 6 as well as revenue from a planned hotel near Pier 1.  Restaurants and food stand concessions will contribute a much smaller share of the BBPDC’s planned park operating budget.

However, just last week, the BBPDC announced that due to poor market conditions, the planned hotel and housing not already constructed was “on hold” indefinitely.  This announcement only increased the community’s anxiety over the project and desire to scrutinize and discuss the park’s unique financial model.

Some in the meeting audience displayed acrimony and sharp criticism towards the BBPDC officials due to the park’s ballooning construction and maintenance budgets that have more than doubled since the BBPDC last released a detailed set of project financials.  Additionally, some at the meeting were angry with the BBPDC over its decision to include luxury housing and a hotel in the park plan as a way to fund the park’s ongoing maintenance rather than seeking other forms of revenue that were not fully dependent on the real estate market.

Other criticism included calls for the BBPDC’s board of directors to better reflect the diversity of opinion about park planning from the surrounding communities.

Ms. Myer announced that the BBPDC would reconstitute a Community Advisory Council (CAC) comprised of members from the local communities. When asked how the selection process would work for the CAC, Ms. Myer said she would primarily look to local elected officials to appoint community volunteers.

Some in the audience raised concern that a previous Community Advisory Council to the BBPDC several years ago was a “paper tiger”, to which Ms. Myer said that she looked forward to the advisement of the CAC and would work closely with the community. Ultimately the BBPDC’s board of directors steers and approves the agency’s direction.

Elected officials in attendance are likely to closely review tonight’s meeting presentation with updated financials and provide comment to the BBPDC and the community.

The meeting was covered by local TV stations and print media.