A reader sends us this:

My neighbor, Dave Younger, at 87 Hicks St. had his disability scooter [apparently] stolen from in front of his apartment on Tuesday, June 25, 2013. He and his wife made a police report but the police were not able to help.

The scooter was close to the curb while packages were taken inside. Mr. Younger cannot walk far and it took some time before he or his wife could return to move the scooter closer to building. Meanwhile, as you can see, a white van stopped and hurriedly picked up the scooter.

There was a video surveillance camera operating and this photo [above] was taken. The fisheye lens makes the van seem longer than usual. The van is actually the normal size.

Mr. Younger has asked me to contact you for help. His email is cdy81248@aol.com

If anyone has any information the family would appreciate it. 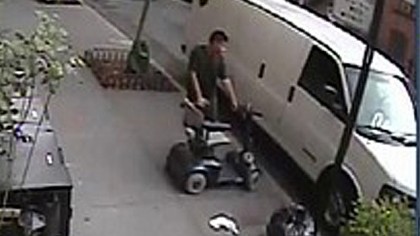