A long time BHB reader sent us this dispatch Sunday afternoon regarding the Brooklyn Heights “super-hero” responsible for repainting many mailboxes in the neighborhood:

I saw this un-caped crusader this past Saturday afternoon, finishing his latest masterwork at the corner of Remsen & Hicks Streets. He appears to be a mere mortal, but one with exquisite brush skills. There is a true altruist among us.

Please give him some appreciation, even though he didn’t ask for it. 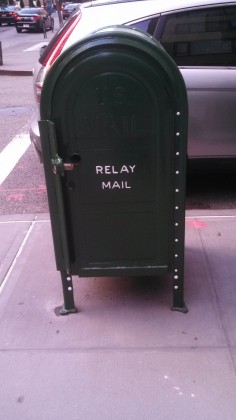 In our report last month about this “avenger’s” work, someone claiming to him made this comment under the name “Mr. X”:

After looking at this horrendous mailbox (and many other similar eyesore painted objects in Brooklyn Heights) for years, I simply decided to take matters into my own hands – despite the legal risk. These objects are a blight to the area and everyone has gotten so used to them that they don’t even seem to notice the blight. This is an unacceptable situation and while people may complain about new useful bike racks and the such, it is surprising that they have no problem living with graffiti covered objects throughout the neighborhood and in many cases directly in front of their homes. They have unfortunately accepted this condition as a part of their ordinary life in Brooklyn Heights and most likely don’t even notice the disgusting conditions. I refuse to live this way. My intention was to paint the mail box in question in the exact same color as the post office blue. However, while the color stamp on the can of paint looked like a match to me (some say I am totally color blind), it proved not to be the case and the color was much lighter than I intended or anticipated. My intention was not to make some kind of color statement with my effort to improve the neighborhood. Nor was it an effort to change the US Postal Service traditional colors. Once I had the mail box prepared for painting, which took much scraping work and rust removal, I had to put a coat of primer on the box. The primer was a special rust-proof type which comes only in an ugly brown. Leaving the mailbox in this condition (covered with brown primer paint) was unacceptable, so proceeding with the blue paint I had at hand was necessary to avoid an even worse temporary eyesore. In community service projects of this type, my objective is to paint the object in traditional colors. The idea is that if the object is returned to its intended form, the public or government agency that is normally responsible for the ongoing repair of the item will not object to a good Samaritan helping out. The repainting will in effect not represent a form a defacing. Your blog post has correctly brought to bear something that I believe needs to be corrected – that the blue I used was incorrect. It is my intention to fix this problem shortly as I will mix the blue I have with some black paint until I have a color match. I also hope to stencil paint onto the box the US Postal Service logo, which was covered in graffiti and which I had to remove to complete the paint job. My attempts to procure these logos from the US Postal service have failed, so I will need to create the logo stencils myself. This mailbox represents the sixth “street” object I have painted at my own time and expense in the past few weeks. The other objects include antique fire alarm box (in progress) , a telephone box (in progress), a “relay” mail box (completed), the black base to the flagpole at the Montague Street entrance to the Brooklyn Heights Promenade (completed), and several overly-rusted “green” street sign poles (completed). I have a number of other similar local projects on the docket as I have concluded that these improvements to the neighborhood are sorely needed and are much appreciated by the local residents. During the course of my work, I have been approached by a number of people I know and many local people I have never met. Universally, the response I get is exceedingly positive. In one case a charming women indicated that she had called the responsible governing agency and asked to have a graffiti covered object in front of her home repainted. Her efforts went nowhere after many requests and an extended period of time. She was more than pleased to see me doing the work she long sought and has been pleased with the outcome. My hope is that as people see these local improvements they will join the effort. Just today, I noticed that a number of the elegant black lighting poles on Montague Street were newly painted (yesterday). I assume that this is a wonderful effort of the awesome Brooklyn Heights Association. I would suggest to those interested citizens willing to help out that any paint work be kept close to traditional colors (unlike my mail box error). In some cases I have added some modest trim work to an object in order to turn something that is completely dull into a object more pleasing to the eye. A number of years ago I undertook a similar project in Brooklyn Heights. This effort was to install badly needed tree guards around the neighborhood trees. The trees are a beautiful local attribute and many were suffering from terrible treatment from dogs and the tree pits had no flowers at all. The situation was depressing, but had become an accepted condition to may. I spent a significant amount of money to have tree guards placed in various spots in Brooklyn Heights, including along Montague Street. This action on my part caught the attention of many and then helped mobilize the Brooklyn Heights Association and local residents into an enormous tree guard installation initiative. The results have been stunning and the Brooklyn Heights Association has done a wonderful job on this front. I hope that my painting effort yields the same outcome. As an aside, the tree guards on Montague Street are in a real need of being repainted! I would ask that anyone who knows whom I am please keep my identity to themselves. I am not seeking any recognition, fame, or acknowledgement. I only wish to make our neighborhood a more lovely place and to help galvanize a new community-wide effort to have everything in the area beautifully painted and shipshape. Yours truly, Mr. X.

Have you seen his other “handywork”? If so, please post photos in the comments below.