Citi Bike Share Day One In Brooklyn Heights And Beyond

After so much whooping and hollering from all sides all sides, the Citi Bike Share program officially launched today, as evidenced by this pic along Hicks at Montague streets—where the newly filled racks extend from the corner at Heights Cafe to J. McLaughlin.

NYC Mayor Bloomberg and Transportation Commissioner Janette Sadik-Khan christened the beginning of program at a docking station near the Brooklyn Bridge Monday morning. Bike-share launches with 6,000 bikes at 330 docking stations in Manhattan and Brooklyn. Some reports claim 9,000 people have signed up for the program so far. 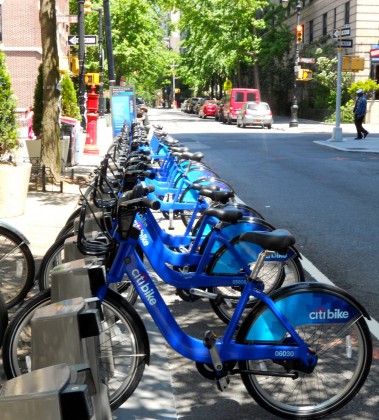 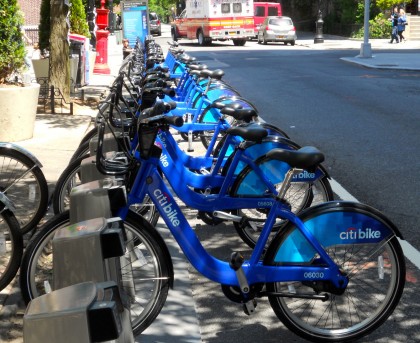 And the reactions from all over the city are trickling in:

I predict CitiBike will be a success in Brownstone Brooklyn, judging by this station in Ft. Greene. twitter.com/OrenNYDN/statu…

Don’t worry guys, I just Chased the first Citi Bike I saw back to the Financial District (Manhattan) #Brooklyn

Took #citibike from Williamsburg to Brooklyn Heights. Nothing but smiles from everyone we passed. #bikenyc

@lpolgreen I rode in from Brooklyn this morning on a CitiBike. It was great! Though I had to divide the trip, so as not to face charge!

First #citibike ride: flawless 19-min ride from Williamsburg to Alphabet City. Took 2 tries to dock my bike. Saw lots of others out there!

“It is illegal to ride with both headphones on.” Lets have be first citation! #citibike twitter.com/skift/status/3…

Findings suggest that bike accident rates won’t soar, even if the Citi Bike program becomes as popular as many predict. theatlanticcities.com/commute/2012/0…

Can’t wait to be a #citibike accident statistic. My bet? It happens with a tourist who stops mid-street to take a pic of an unimportant bldg

How long before a clueless #CitiBike tourist gets hit by a car?

Citibike or citideath! You decide. Literally 45 seconds after getting on I hit a metal plate when… instagram.com/p/Z0oDMpoZPC/