We’ve been haunting the streets of the Heights, and setting traps along the Promenade, but given our limited resources, believe he’ll only be captured with the help of the community. So far the response has been terrific; it’s just that there are an unexpected 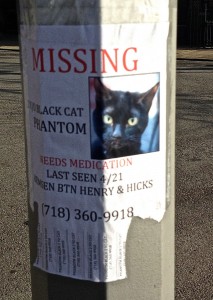 number of other cats on the streets who may be mistaken for Phantom.

He is all black (no white markings), approximately 15 lbs., and is not wearing a collar. We believe he has settled into the area between the Promenade and Willow Street, bounded by Clark and Pierrepont streets. He has been spotted at those two entrances to the Promenade. He is too frightened to approach people but might if they carried a little cat kibble to tempt him.

We are seeking permission to place havahart traps in the Promenade gardens, and would greatly appreciate access to private gardens on Columbia Heights or Willow Street to set additional traps.

Again, if he is spotted, pleasae contact BrooklynBridgeAnimals@yahoo.com or call 347-599-1930. All messages are picked up immediately.

People may also post information or offers of assistance on our Facebook page. Please help us bring poor Phantom back. He has a loving home waiting for him. Thank you!

A caution to pet owners: In our effort to capture Phantom, we have trapped, vetted and released two adult feral cats in Columbia Heights gardens near Pierrepont, and rescued a litter of four small kittens. One of the feral cats tested FIV positive and showed recent battle scars. People who allow their cats to wander outside should be aware of this serious risk, among others, to their cats’ health. 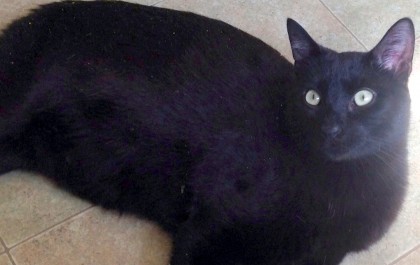 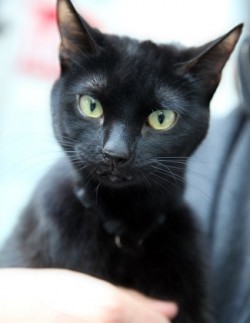