Nasty! Court Street ‘R’ Subway Station Could Use A Hose Down Post-Sandy

Swartz writes to BHB, “Hurricane Sandy closed Court Street for months due to flooding and subsequent clean-up and repairs. I took this picture today. MTA needs to clean up its act. Trains are more crowded than ever. People fight each other for seats and wind up sitting on each other’s lap. I have been used as an arm rest by big beefy guys a number of times. The MTA must put more trains in service thus reducing wait times and overcrowding.” 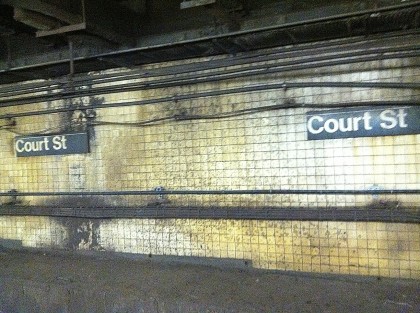 Take A Look At Me Now: Holly Jolly Heights
Residential Real Estate 1Q 2013: ‘It Is A Hot Market In Brooklyn Heights’