War on Fun Breaks Out on DUMBO, Brooklyn Heights Border 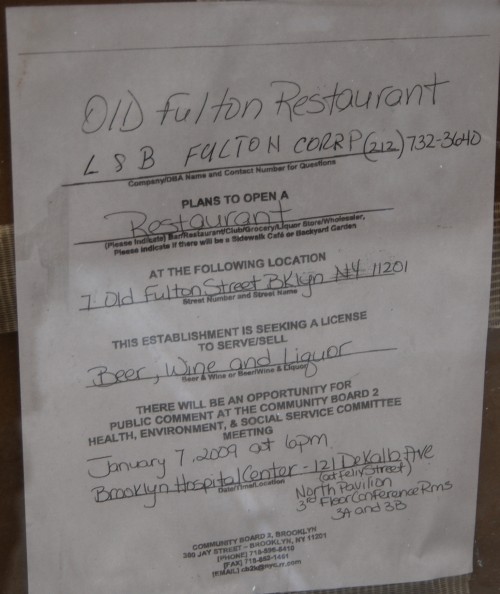 Many Brooklyn blogs and media outlets received a dispatch yesterday from a resident at 7 Old Fulton Street, who really, really doesn’t want a new restaurant planned for his building to get a liquor license.  He’s urging residents to go to the CB2 meeting scheduled for Wednesday night at Brooklyn Hospital Center. The full text of the letter after the jump.

I’m writing to let you know about a liquor license hearing that will be taking place next week.

At 7 Old Fulton Street, in DUMBO/Brooklyn Heights Brooklyn, there’s a new restaurant opening at some time in the near future. I live in the same building, so I’ve spoken briefly with the owner of the new restaurant, and he’s told us that it’s going to be a sandwich shop.

The hearing is for a full liquor license to allow them to serve beer, wine, and spirits. I was hoping to let people know about this because I’d imagine locals wouldn’t be too happy about this. I can’t imagine why a little sandwich shop would need a liquor license, and It’s pretty clear that the guy opening this restaurant isn’t much interested in what is good for the neighbourhood. He and his construction crews have been nothing but disruptive to his neighbours, and we’ve had to call 311 countless times to report the unlawful and improper practices going on. It might be different if he were putting in something that people in the area would use, but he’s seemingly just trying to get some business from tourists down by the Fulton Ferry Landing who don’t feel like standing on the Grimaldi’s line.

As a reminder, in the last month, the community board denied a liquor license to the Brooklyn Ice Cream Factory on Fulton Ferry Landing because they felt it wouldn’t be a great idea to have more alcohol down there with all the tourists and kids everywhere. At present, within a one block radius of 7 Old Fulton Street, there are at least 4 other places with liquor licenses (River Cafe, Pete’s Downtown, Toro Asian, and 5 Front), and I’m not sure about the status of Grimaldi’s.

I represent the residents of this building, and we’d like to let anybody who might be affected by this place getting a liquor license that their liquor license hearing is coming up. Like I said, this guy has been completely indifferent to the needs and concerns of the residents of this building, and I’m pretty convinced that’s how he’ll be with the neighbourhood in general. So we’re going to be opposing his liquor license application, and we wanted to get the word out to anybody else who might be interested in having their voice heard too.

The hearing will take place on Wednesday January 7th, 2009 at 6pm. It is located at the Brooklyn Hospital Center, 121 Dekalb (at Felix), 3rd Floor, Conference Rooms 3A and 3B.