Cadman Plaza Astroturf: This is Beautification? 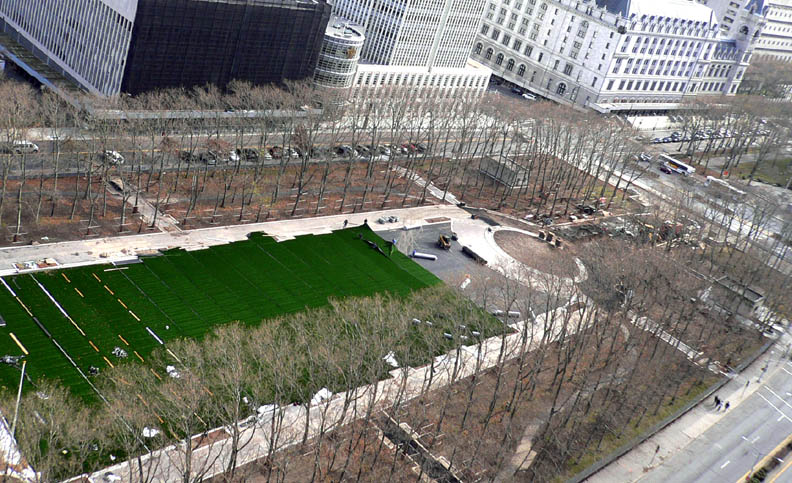 The "beautification" of Cadman Plaza Park has begun as documented above by nabe blogger Twofones.  The plan to renovate the park's "dustbowl" by laying down artificial turf was initially opposed by the Brooklyn Heights Association, but on its website, the BHA praises Parks Department officials for their "commitment" to the project. The project does sound promising, despite the turf (aka worst idea ever?). City Councilman David Yassky was the major advocate for phony grass, which is said to have been the only option on a plot of land that reportedly hasn't been able to sustain real grass for decades.

Opponents of the project claim that the public park is just a "private park for rich kids paid for by taxpayers."

The current design for the area includes plans to level the central playing area and replace the dust bowl with Astroturf. In addition, new running paths will curve between the four rows of sycamores; special seating areas with new benches will provide shady areas for rest and watching the more athletic. New lower-canopy flowering trees will edge the Astroturf. The flagpoles will move to the War Memorial plaza, and the paths around the turf will be at acute angles, making the view across the turf more interesting.

Later phases of the project will rebuild the north end, between the Brooklyn Bridge and the War Memorial, and the area to the south, including the area opposite the Post Office between Tillary Street and Columbus Park.

The BHA is working with various federal agencies to expand the fenced perimeter of the park with the ultimate goal of keeping all vehicles (except for maintenance vehicles) out of the park. Recently, Congressman Ed Towns and Congresswoman Nydia Velazquez jointly applied for an appropriation from the Homeland Security Agency to fund the extra security. In addition, the BHA is exploring the possibility of a Cadman Plaza Park Conservancy, which will raise dedicated funds for the upkeep and maintenance of the restored park.