An “Eternal Flame” Relit Over Brooklyn 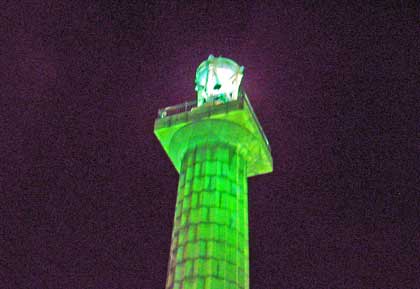 Yesterday evening, despite heavy rain during the day and still threatening skies, 200 or so people gathered in Fort Greene Park to attend the rededication of the Prison Ship Martyrs Monument, which honors the approximately 11,500 Revolutionary War combatants captured by the British who died aboard old warships anchored in Wallabout Bay (adjacent to the present Brooklyn Navy Yard site) and used to house prisoners of war.  Conditions aboard these ships were so horrendous that almost one third of those imprisoned did not survive.  The monument, a Doric column designed by the eminent architect Stanford White, was dedicated exactly 100 years before, also on a rainy day, in a ceremony at which then President-Elect William Howard Taft was the guest of honor.

Over the years, however, the monument was neglected and fell into disrepair.  The “eternal flame” at its top went out in 1921 and was never relit.  About ten years ago, the Fort Greene Park Conservancy, spurred by former Chair Ruth Goldstein, formed a Centennial Committee to raise funds for, plan and implement the restoration and rededication of the Monument.

Among the speakers at the rededication, along with Ms. Goldstein, historian Edwin G. Burroughs (co-author of Gotham), Borough President Marty Markowitz and other political figures, was Harrison Davis, President of The New England Society in the City of Brooklyn and a resident of Concord Village. The New England Society was prominently involved in rasing funds for the original construction of the Monument.

At the close of the ceremony, after wreaths were laid at the foot of the column, the “eternal flame”, now consisting of electric lights reflected from a mirror, was relit, and will be lit daily during the hours of darkness. It should be easily visible from eastward facing windows or roofs on taller buildings in or near the Heights, as well as from other parts of Brooklyn and other boroughs.