Charlie Sahadi Welcomes You Back Monday; Atlantic Antic Next Sunday

Your correspondent was walking along Atlantic Avenue this afternoon and saw workers busy rearranging shelves and getting Sahadi’s ready for its grand re-opening. Then Charlie himself appeared at the door, where he said he’s eager for Monday to come so he can greet his customers at his bigger and even better store. We’ve previously reported about the expansion plans, which include creating a new corridor from behind where the cheese department was located to the new space, which will house a larger cheese selection, among other things. 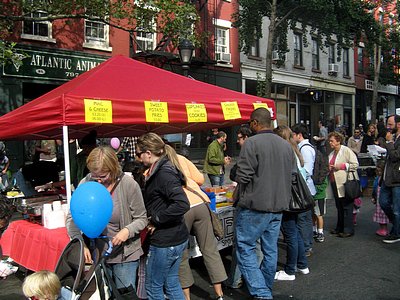 Charlie is also looking forward to participating in the 38th annual Atlantic Antic, coming up next Sunday, September 30, from noon to 6:00 p.m.

Atlantic Avenue’s Catania Cafe Is Officially Kaput
To Walk, or Not to Walk?