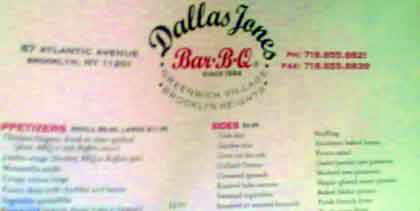 Ok, so it’s Mrs. Fink’s night out with her goomadas and Homer’s hungry.  Since I’m sucker for marketing, the menus from the newly opened Dallas Jones BBQ at 87 Atlantic Avenue left on our stoop made tonight’s decision for me.  Let’s see if these guys have the right stuff.   Here is my experience in real time.. more or less:

7:00pm:  Finally got through, phone has been busy for 10 minutes.  The nice lady on the phone seems real busy and a little hard of hearing.  Placed my order.  The wait begins.

7:30pm  Waiting… if this were Domino’s back in the day it would be freeeeeeeeeeee! 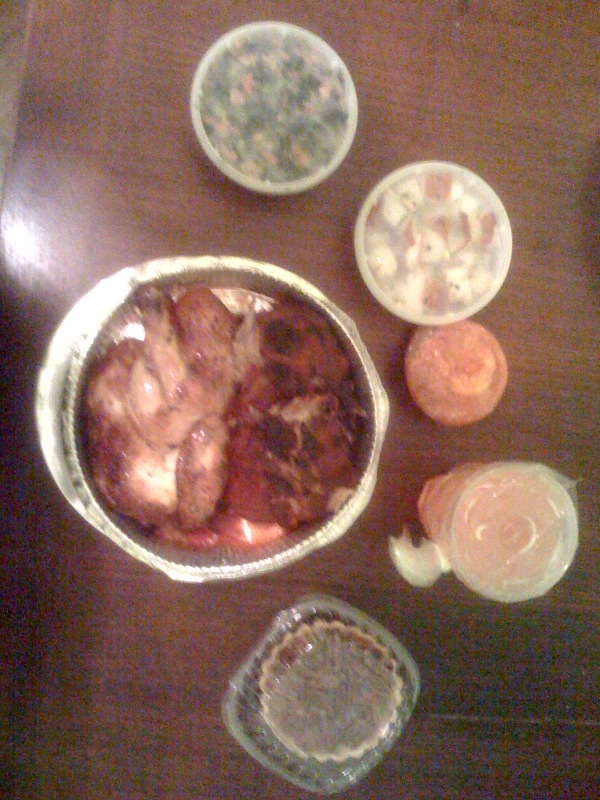 8:22pm  The verdict: While not the best BBQ I’ve ever had, it certainly beats the late lamented Pig n’ Out BBQ on Henry Street (purveyors of “charred remains, not food” is what I’ve said in the past).  Chicken was cooked well and tasty, ribs were good (not of the caliber of RUB or Virgil’s). As for the sides – the collard greens were not prepared in the traditional greasy sugary sense but were enjoyable just the same.  Garlic parsley new potatoes were OK but seemed under cooked and over garlicky.

All together, Dallas Jones BBQ gets a thumbs up for good, fresh food for delivery in the Heights.  And boy, do we need more of that!