As reported by BHB August 14, the sidewalk in front of the span from 111 to 115 Montague Street will be a battle zone as infrastructure construction work below ensues for the next three months. Affected buildings include the Chinese Hand Laundry, McCurdy Real Estate, Peerless Shoe Repair, Connecticut Muffin and Subway sandwiches.

However, by the looks of it, crews have done a pretty boffo job of allowing neat, accessible entrance to affected businesses, while sectioning off a wide enough swath along the street for pedestrians to move along nicely. (No word on whether the walkway was measured for “baby bulldozer” double-wide stroller access.) (Photo: Chuck Taylor) 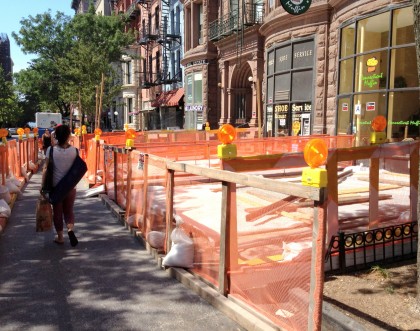 Quote Of the Day: Downtown Brooklyn ‘Back To The Future,’ M. Markowitz
Columbia Heights Residences Profiled In New York Times