Season Opener For BBP ‘Movies With A View” Packs The Lawn For ‘E.T.’

The season opener for Brooklyn Bridge Park’s “Movies With A View” Thursday, July 5, drew thousands to the Pier 1 Harbor View Lawn to see “E.T.: The Extra-Terrestrial.”

Sen. Daniel Squadron, BP Marty Markowitz and BPPC Executive Director Nancy Webster were all on hand, according to McBrooklyn, which also provides the photo from MK Metz. Also in the audience was actor Robert MacNaughton, who played Elliott’s brother Michael in “E.T.” Musical entertainment was provided by Brooklyn Radio DJs, with a short film, “CatCam,” by Seth Keal, who was also in the crowd. 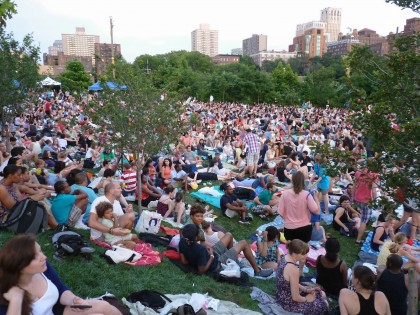