In recent times, the 15,000 folks that reside across the half-square mile of Brooklyn designated as “Downtown”—unfolding at the ends of the Brooklyn and Manhattan Bridges—have again earned the right to call their locale a “neighborhood.” With a massive influx of new residential projects, it is no longer merely “near Brooklyn Heights” or “on the edge of Boerum Hill,” says Nora McCauley, who has lived in the destination for six years. “I’ve started to say just that I live Downtown.”

That’s the calling card of a Thursday New York Times story titled “To the Heights and the Slope, Add ‘Downtown’.” The piece delves into the history of the area, recalling that the first land rush came in the early 1800s, after Robert Fulton’s ferry service eased the link to Manhattan. Country lanes were transformed into lively blocks of city dwellings.

But “a century and a half later, efforts at ‘slum clearance’ demolished many of those same buildings,” the Times reports. “In place [came] Cadman Plaza, a linked collection of three high-rise co-ops, with shops and parks. In the same spirit, the city in the 1990s closed streets near Flatbush Avenue for the creation of the 14-building MetroTech Center. Low-slung tenements were relegated to the wrecking ball in favor of hulking bank offices.”

McCauley once rented a two-bedroom apartment in Brooklyn Heights with access to a garden. In 2006, she paid $660,000 for a 2-bedroom Downtown condo that faces the “urban bustle” of Court Street. “We definitely sometimes miss sitting on a stoop,” she says in the NYT, but relishes the year-round farmer’s market in front of Borough Hall: “It’s hard to beat in terms of convenience.”

The Times adds, In February, Downtown officially became more similar to the Heights when the city approved the Borough Hall Skyscraper Historic District, which covers more than a dozen buildings. As well, the story reflects its rejuvenation as an active neighborhood: “Years ago [sidewalks] were empty on Saturdays and Sundays, after the courts adjourned. But shoppers, tourists and bicyclists now” pervade.

The New York Times also discusses the new high-rise residential developments changing the face of Downtown Brooklyn, along with current prices, the commute, what to do and more history. Read the story here.

(Photos: Top: Chuck Taylor; below: C.J. Hughes/NYT)
“A bluestone plaza in Columbus Park, seen from the steps of Borough Hall, is one of many magnetic spaces in Downtown Brooklyn, an oft-reinvented area that residents seem increasingly to see as special and worth preserving.” 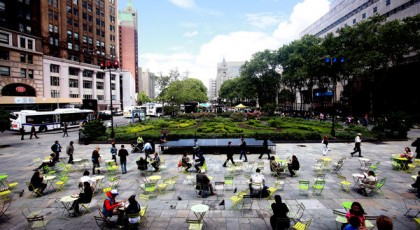 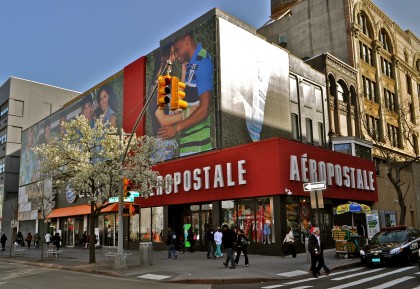