By Chuck Taylor on May 15, 2012 2:37 pm in Commercial Real Estate, Development, Landmark Preservation

DUMBO-based developer Fortis Manor, which purchased the homely one-story Brooklyn Eagle Building at 30 Henry Street & Middagh in November 2011, paid $3.5 million for the property, according to a post today on Brownstoner. Broker Massey Knakal confirmed the figure, which is $500K over its asking price of $3 million.

That comes out to a cost of $209 per buildable square foot. Brownstoner notes that the site allows for a total of 16,740SF on the site. As previously reported, a six-story red brick building is slated to take its place.

The Brooklyn Eagle building was constructed in 1963 and was thus landmarked, but it has already been approved by the Landmarks Preservation Commission for its new incarnation. A rendering for the future building is below. 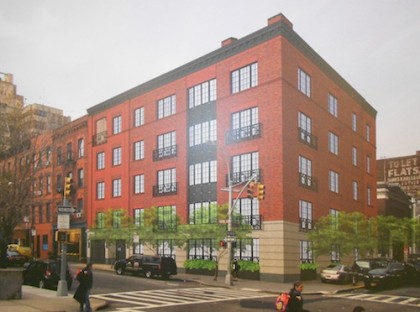