Paul Giamati, meet your new neighbors. Sarah Jessica Parker and husband Matthew Broderick are purchasing a pair of townhouses in south Brooklyn Heights on State Street near Sidney Place. The New York Daily News‘ real estate guru Jason Sheftell reported late Friday that the family is closing in on a contract, after purchasing a Manhattan townhouse on East 10th St. two years ago that they never moved into.

In 2011, Parker filmed I Don’t Know How She Does It in Brooklyn Heights. Check out our coverage here.

The couple currently resides in a townhome in the West Village on Charles Street, near West Fourth Street, with their son James Wilkie, 9, and twin daughters Marion and Tabitha, almost 3. A source told the Daily News, “They loved the West Village but wanted something more private, laid-back and discreet.”

When construction is completed, the two adjoining State Street townhouses the actors purchased will create “an urban mansion of 7,000-plus square feet with a suburban-size backyard,” the News reports. Both were an “off-market” transaction, meaning the houses weren’t officially for sale, according to Sheftell. City records show both are owned by Mark and Diane Baker.

Parker and Broderick paid $18.995 million for the East 10th Street townhouse two years ago, and fully remodeled the home, which the News says is now on the market.

CORE senior vice president Doug Bowen noted, “Brooklyn Heights is the city’s first official historic landmark district; that’s how beautiful it is and what it means to New York. The price difference between the West Village and Brooklyn Heights is sometimes two, three, four times the amount. That’s why even big names are deciding to live here. It’s an easier financial commitment.” 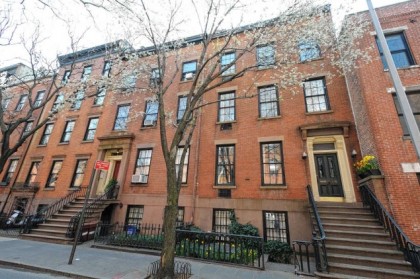