On Tuesday, I saw a large pile of logs piled next to the curb in front of 146 and 148 Hicks Street. I later received an e-mail from a reader who lives in a nearby building, saying that a healthy tree behind 148 Hicks was being taken down for no apparent reason. The reader described this as a “tree of heaven,” presumably Ailanthus altissima. 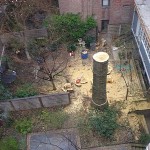 The next morning, I went to the same spot and saw (see photo) logs loaded onto a truck, and another truck, with the hopeful name “SavATree” emblazoned on the side, but with a wood chipper behind. A worker came from behind 148 Hicks. I asked him if the whole tree was coming down, or if it was just being trimmed. He said it was coming down. I asked if the tree was unhealthy. He said there were some problems near the bottom. More photos and text after the jump. 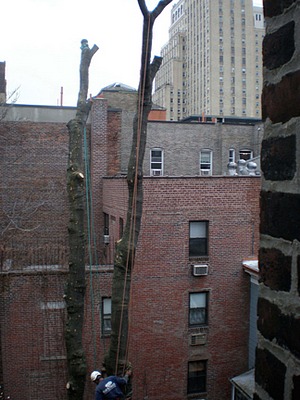 This is a photo, taken by a neighbor, of the tree at nearly its full height, but after most branches had been removed. 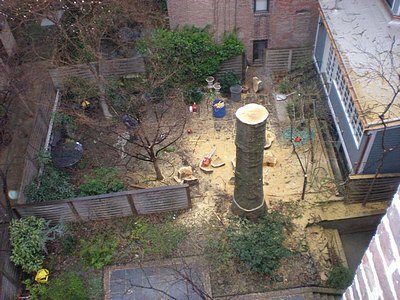 Another photo, taken by the same neighbor, of the remaining stump near the bottom, with no evidence of problems. Perhaps they were further down? The neighbor suggests that the tree was destroyed to keep it from interfering with a new rooftop addition to 148 Hicks.

What say you? Unjustified arboricide or mercy killing?

Quote Of The Day: ‘BH Is Too Small, Too Old For High-End Specialty Shops’
Brooklyn Bridge Park Pier 4/5: Signs Of Progress?