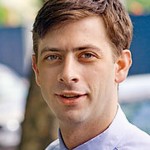 A few weeks ago Ben Petok, the communications director for City Council Member Steve Levin, whose district includes Brooklyn Heights, contacted us to set up a get-acquainted meeting. This past Friday morning, your correspondent went to Levin’s district office at 410 Atlantic Avenue and conversed with him for about an hour. Here are some of his thoughts on various topics he thought were of interest to our readers:

Education: Levin considers this his primary interest, and he sits on the Council’s Education Committee. He is proud, he said, of his role in bringing about the addition of a middle school to P.S. 8. As a general observation, he said that he believes the pendulum on education policy has swung too far. Where there was once an out-of-control, too often corrupt bureaucracy running the schools, there is now a monolithic technocracy that is unresponsive to the concerns of parents and others with a stake in the system.

He said he had seen too many instances of meetings called to solicit parent and community views on issues like school siting, at which public opinion had been almost solidly against what the DOE proposed, but the result was always, “The ayes have it.” As an example, he mentioned the controversy over the siting of a charter school in an existing school building on Baltic Street. He believes this situation will change after the 2013 mayoral election. I asked if he was supporting any potential candidate, and he replied that it’s too early to make a decision, but that he’s on good terms with all the likely candidates.

Brooklyn Bridge Park: He is watching the build-out of the Park with great interest, but said he is disappointed by the City’s lack of jurisdiction over it. He sits on the Park’s board of directors, but still would like to see more oversight by elected officials and the City’s Parks Department. On the related issue of the Watchtower properties, I noted recent reports that Watchtower officials would prefer that, after the properties’ sale, they be put to uses such as not-for-profit or educational institutions that would keep them off the City’s tax rolls and would, as a side effect, prevent them from being able to contribute to funding for the Park. Levin said that, in his experience, the Watchtower leaders were very straightforward, and could be trusted to do what they said they would.

He said the future of LICH was a critical issue for the community. While the takeover by SUNY Downstate has stabilized the situation, it’s vital that LICH’s future be secured. I noted that the future of the BQE was also an important issue for Heights residents. He agreed, mentioning constituents who had complained of their homes shaking when trucks hit surface irregularities. I said our readers had made similar complaints. However, he said, there is little that the City can do. It was the State’s Department of Transportation that cancelled funding for the environmental study, and funding for repair or reconstruction would have to come from the federal government.