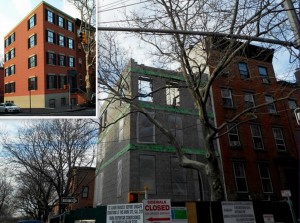 When does a single family home have its own sales website? Answer: When the asking price is $6.2 million for new construction in the Heights. The five-story red brick townhouse (including garden level) at 314 Hicks Street on the corner of State, is one story from topping out, according to Brownstoner. Inside: 5 bedrooms: 5 baths & 2 powder rooms, living & formal dining rooms, family room, eat-in kitchen and study. It also boasts an elevator serving all five floors, two fireplaces and central air.

Landmarks approved the design in 2007, but construction didn’t begin until last year. Developers Gordon Kahn, Bilotta Kitchens and ZMK Group also renovated the townhouse next door at 45 State Street, which sold it for a cool $3 million.