Photo by M. Hermann for BHB

Motorists heading across the Brooklyn Bridge this afternoon were taken by surprise when their rear windows suddenly shattered. Eight cars on the Brooklyn-bound side of the bridge in the left-hand lane were passing an area where construction is ongoing, and sandblasting was in progress, when some sort of debris started hitting them. At least two cars collided during the hard brake that resulted, sending two people to the hospital. No other injuries were reported. 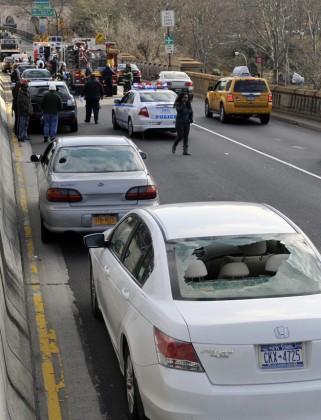 Photo by M. Hermann for BHB

“My ears are still ringing,” said Sasha Clemendore, who described the frightening sound of the impact. Emergency workers and numerous representatives from the construction crew working on the bridge were on scene immediately, and traffic on the bridge was down to one lane for over an hour. Damage to the cars ranged from golf ball-sized holes to near total destruction of the glass.