The Sharks and the Jets: Part III

It happened yet again, not a half hour ago. I had barely gotten Bangor out his front door when Daisy barked. His ears went up and he stood straighter, his tail rigid, darting his eyes around the street. “Daisy,” I said wearily, “there’s no one there.”

But there was someone there. She had smelled a Pembroke-duck-toller mix at the end of the block, walked by a man reading a magazine who laughed as my Labs strained against their leashes at that half-Enemy Number One to nearly all Labradors: the herding dog.  I was back to West Side Story again, assuring them that,

I’ve got a leash on your bones,

With the some big exceptions, Labs can be counted on to tolerate other Labs as long as they maintain the breed’s notions of propriety and turf. If my dogs go gnarly on a new Lab, I always remind them, “That’s a Labby. He’s one of us – ,” meaning, he’s a Jet.

The herder is a Shark. This is an over-generalization, of course. Daisy’s canine godmother is the recently deceased Godiva, a Bouvier des Flandres whose DNA is herding and carting. When Godiva gave a deep woof and went after Daisy, it was soccer without a ball, sidestepping, zig-zagging, crouching and cutting off, slithering under and sprints with Daisy’s head turned in an I-dare-you. Those minutes were laugh-out-loud zaniness and love.

Aside from the Bouvs and several other old friends (Sugar Plum, Digger and Chadow, an Australian cattle mix, boarder collie and Australian sheperherd, respectively), when I’m with Daisy, I cross the street when I see the pointed ears or the mop-body of a herder. It’s easy to see why the groups are inimical when you watch them in the dog run.

Labs seem to have many interests but they all come down to one thing: oral gratification. Whether it’s carrying a ball, tug-of-war, wrestling, or chewing sticks, Labs like having their mouths full. Take away the mouthful and a Lab will go to extremes to get it back, running their flat-out hardest, pulling like a gold rush dentist, or leaping so high they can look me in the face (I’m 5’8”, for the record). All of this activity looks chaotic to a corgi or a Wheaton. 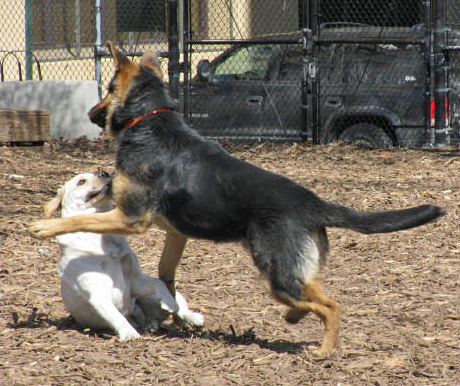 In contrast, a herder’s interests are in bookkeeping. How many animates are there? Where are they? How can I get them together so that I can make sure my numbers add up? Said-herder’s answers are to run in ever-tightening circles, gathering the animates in as close a knot as possible. Rebels are quashed into place or nipped on the butt to urge them along.

Labs don’t run in ever-tightening circles unless it’s an accident of ecstasy or there’s a game of prey going on, whether they’re the object or in pursuit. Labs don’t like being nipped on the butt. When the chase ends, they like to gnaw on necks, possibly because they’re hunting dogs and the neck is the kill-site. This gnawing is natural and, having spent too much time on the floor with them, so gentle that one can insert a hand into their mouths while they’re at it.

The collie’s nip is a nip, sharp enough to get a rebel wooly or leathery hide’s attention. And sometimes a Lab will nip and bark back. When this happens often enough, it becomes habitual: Hermia’s teasing as she threatens a fight while clutching a ball in her mouth and barking around it, timidity, which Pickering displays, or dislike, in Bangor and Daisy’s cases. Whatever their reaction, it’s because, as Sondheim wrote in “Jet Song,” “the spit hits the fan”.

In defense of the herder, bookkeepers don’t really have enemies. They stick to the numbers, using their intelligence – and they fill the ranks of the most intelligent dogs – to make the numbers stick together.