By Claude Scales on October 20, 2011 9:07 pm in Brooklyn Heights, Transportation 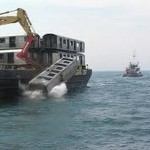 It’s a repeat (and next weekend will be a three-peat) of the no-2-or-3-train-to-or-from-Brooklyn madness, so, again, no service at Clark Street or on the 2 and 3 platform at Borough Hall. To get to destinations in lower Manhattan for which you would normally take the 2 or 3, use the 4, 5 (which, unlike most weekends, will be running to and from Brooklyn), R, or (late night) N, but not the Manhattan bound A or C, which will be running on the F line (i.e. through the Lower East Side) between Jay Street-MetroTech and West 4th Street. Brooklyn bound A and C trains will be running on their usual route, but won’t be stopping at Fulton Street, the last stop in Manhattan before High Street. There will be no Manhattan bound service at High Street, so you North Heightsers will have to hike to Montague (Court Street) for the R or Borough Hall for the 4 or 5.

If you’re heading into Brooklyn, the 5 will replace the 2 to Flatbush Avenue-Brooklyn College, and the G will not be running between Hoyt-Schermerhorn and Church Avenue. If you’re planning a late season jaunt to Rockaway Beach, you should know that the A train won’t be going past Howard Beach, but a free shuttle bus (with a guy who’s got the disco on the radio) will take you the rest of the way. Also, for those going to Midtown North or Queens, the R train will be diverted onto the F tracks between 57th Street-7th Avenue in Manhattan and 36th Street Queens in both directions. To get to 5th Avenue-59th Street (Apple store, Bergdorf’s) or Lexington Avenue-59th Street (Bloomies), change from the R to the N at 57th; to get to Queens Plaza, take the A, C, or F to West 4th and change there for a Queens bound E.

Got all that? Good. Have a great weekend.