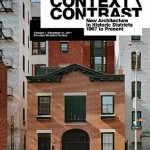 Context\Contrast: New Architecture in Historic Districts, 1967 to Present will open at the Brooklyn Historical Society, 128 Pierrepont Street (corner of Clinton), this Thursday, October 6, starting at 6:00 p.m. The opening is free, and all are invited. BHS members are invited to a preview starting at 5:00 p.m. Refreshments will be served at the preview and at the opening.

Featuring nearly forty different projects focused on the areas of Brooklyn Heights, South Street Seaport, SoHo, and the Upper East Side, Context\Contrast explores how new buildings and historic districts have learned to coexist in New York, the country’s most culturally and architecturally diverse city. This traveling exhibition has been shown in New York, Washington DC, and Dallas, and concludes at BHS in Brooklyn Heights, the first historic district in New York. The exhibition will run from October 7 to December 31.

The image is of one of the new buildings featured in Conetxt\Contrast, 43 Love Lane in Brooklyn Heights, completed 1999, designed by DeLaCour and Ferrara Architects. The photo is by Elizabeth Felicella.