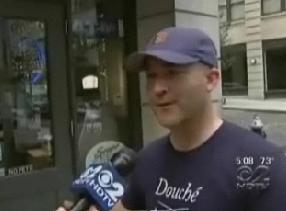 WCBS-TV reported Thursday on a story that DUMBONYC had been on earlier this month – DUMBO’s problem of rampant car break-ins.  The Brooklyn Paper reports that cops have a suspect – a career skell who was just released from jail in July.

Families walking dogs and pushing strollers during the day say their neighborhood becomes a playground for vandals every night. Residents often awake to smashed windows, but rarely is anything stolen from the cars.

“The window was smashed and two dollars in coins was taken out of the car,” another resident said. “That was all they stole.”

“There’s been over 20 incidents in our building alone. I’m telling you, it’s like every night you come out here, you know a car got hit,” Linial said. “It’s just [a matter of] whose car is it gonna be. It’s gotten a little ridiculous.”

There’s even a map created by a resident of where the break-ins have occured:
View Larger Map