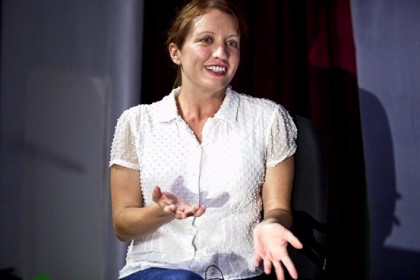 BHB contributor/Brooklyn Heights resident/FILMMAKER Heather Quinlan is featured in the Wall Street Journal today. A 20 minute version of her If These Knishes Could Talk makes its debut next Saturday at the Art of Brooklyn Festival. Check out the video after the jump.

WSJ: Filmmaker Heather Quinlan began the project as a tribute to her recently deceased father, and quickly realized that hers wasn’t the only nostalgic fondness for linguistic curveballs like “terlet,” “cawfee” and “fuhgeddaboudit.”

“Obviously New Yorkers are very interested in the New York accent,” said Ms. Quinlan in her Bronx-Irish-Italian accent. “But it’s something that captures a lot of people’s imagination, whether they’re New Yorkers or not.”

To make “Knishes,” she solicited participants in busy pedestrian areas with a sign asking, “Do you have a New York accent?” (The answer, most of the time: “I dunno, do I have an accent? You tell me.”) Her 30-plus subjects include man-on-the-street encounters and formal interviews with New Yorkers including writer Pete Hamill (Brooklyn) and filmmaker Amy Heckerling (Bronx).