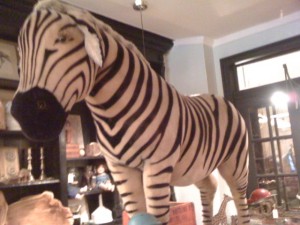 Contrary to popular opinion, Atlantic Avenue west of Hicks Street is good for more than just a cheap brew at Montero’s, or a visit to the beautiful park at Pier Six. Turns out this oft-forgotten stretch of road is prime territory for obtaining a six-foot-long stuffed zebra from Tommy Hilfiger’s Connecticut estate.

“I told Zak that if he didn’t buy it, I wouldn’t love him anymore,” Gillette Wing said of the oversized animal her husband Zak eventually agreed to purchase, though she admitted, “It’s kind of a hard sell.”

Fortunately for the Wings, most other items in their two-year old store are not. Since opening Holler & Squall at what a magazine once referred to as “the dead end of Atlantic Avenue,” they’ve watched many a couch, chair, table, lighting fixture and bureau come and go with relative ease.

“It’s a big departure from what we thought it was going to be when we first opened,” Zak said. Initially they focused more on jewelry and other decorative items, but quickly figured out that furniture was what people really wanted. Looking back at pictures, Zak and Gillette laugh at how sparse Holler & Squall appeared when it first opened.

But, he conceded, “When you’ve got good stuff, you want it to be out on the floor.” 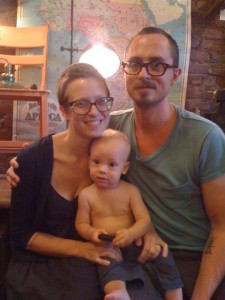 The Wings find their good stuff mostly at auctions and flea markets, like the famous one at Brimfield in Massachusetts. They honed their ability to decipher treasures from trash while working at Housing Works, the New York City-based nonprofit thrift store where they met and fell in love. A little over a year ago their son Paul entered the world, and he, like the dozen or so taxidermy that adorn the wall, is a regular fixture at Holler & Squall.

Neither Wing is from New York, but they’ve called it home for nearly a decade, with the exception of a brief stint in Asheville that made them long for the ability to get a bottle of seltzer at four o’clock in the morning. Now they reside not far from their store, and can’t imagine having it any other way because, well, Brooklyn Heights has been so darn good to them.

“I really didn’t anticipate having so many customers who…I want to be friends with,” Gillette said, estimating that around 85 percent of their customers make repeat purchases.

Soon, fans of Holler & Squall will be able to peruse its ever-changing inventory at a new location on the corner of Henry Street and Atlantic Avenue, a space Zak and Gillette have been coveting for a while. The rent maybe higher in Brooklyn Heights than in other parts of town, but leaving the region was never an option.

“It would be so hard to leave our customers, and leave everything we built, which was definitely something I didn’t anticipate,” Gillette said, adding, “Now, we can’t even imagine being on Court Street.”

Another perk of the new site is the storefront’s giant corner window, which will provide passersby with an unobstructed view of the taxidermy the Wings have grown to love. To their surprise, the clientele agrees. 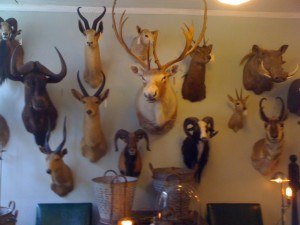 “That is the last thing I ever thought we would sell in here,” Zak said, as the various formerly four-legged animals stared blankly in our direction. “I figured people’s views on taxidermy would be very negative in this neighborhood. I thought people would come in and be like, ‘How can you sell this? You’re killing animals!’ But people freak out! They love it.”

Whether the heads sell or not, he believes they draw into the store the customers who end up buying the more practical pieces, few of which the Wings refinish. “We’d rather buy something we can sell as is,” Gillette explained. Or, her husband quickly chimed in, it can become the customer’s project.

Holler & Squall, which takes its name from a comment bluegrass musician Jimmy Martin once made during a concert, will maintain its current stock of furniture in its new space, though the Wings hope to add more of Gillette’s handmade jewelry into the mix. They also talk about doing some interior design consultations for people in the future. “I think that’ll naturally and organically happen over the next few years,” said Zak.

For now, they’ve got their hands full traveling around looking for their next great purchase, keeping the floor full, and making sure Paul, who is 13 months old, doesn’t toddle into (or onto) any of the goods.

“In a couple more years,” Zak speculated. “We’ll have him sweeping floors.”