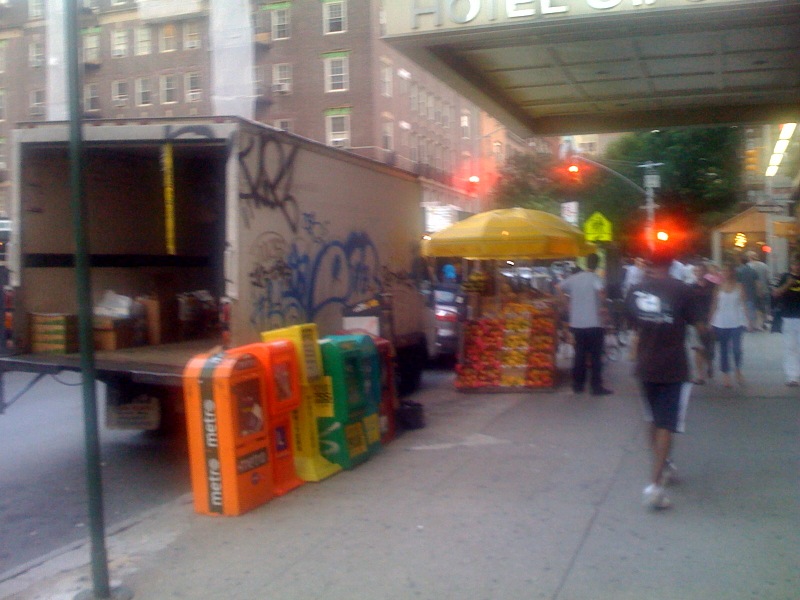 The Brooklyn Eagle spoke with Fatih Deirbas, owner of the fruit stand that popped up on Henry Street a couple of weeks ago.  He tells the paper that he has many fans in the neighborhood but also that some people have complained.  CB2’s Robert Perris tells that paper that everything with the cart is legal including its distance from the subway entrance and an a-OK from the NYPD.

Brooklyn Eagle: Fruit Stand…: “There has been a mistaken impression that all of Brooklyn Heights is off-limits to street vendors,” Irene Janner, office manager of the Brooklyn Heights Association, told the Brooklyn Eagle Monday. But “only Montague Street is off-limits,” she said. “A lot of residents don’t like it [the fruit stand], and there are issues with his van parked at the meters all day. When does the street get swept?”

On the other hand, Janner said, “some people like it.”

“Somebody complained, the police came here three times,” said Deirbas. He says someone from the city told him, “If somebody bothers you I’ll give you some papers. So thank God. We have a permit from the city — everything is legal.”

With All this Chatter About “Push Polling”, Let’s Try One!
Squadron’s Camp Responds to Push Poll Controversy