By Bob Furman on June 26, 2011 9:19 pm in Brooklyn History, History
Dances were a way for young people to meet, and included outdoor events in gardens and taverns, called “germans” or cotillions, when held in private homes. In the 1880s organized dances called Junior Assemblies, Cinderella Balls and Bachelors Balls were held. Clubs often sponsored these events, and Dr. Charles Shephard’s Turkish Bath, America’s first, on Cranberry and Columbia Heights from 1863 until 1913, may have served this purpose also.
Starting in 1857, a series of receptions organized by Mr. and Mrs. George Geran were held at a brick building owned by John Prentice at Furman and Montague Streets. The Gerans lived next door and also owned a country place in Jamaica. He was a sailmaker in Manhattan and retired when steam replaced them. There was also a monthly “hop” on Governors Island, and these events were the core of the social season in the 1850s and sixties. Later, an Ihpetonga Ball begun in 1886, was notorious for being exclusive, i.e., it excluded those not deemed sufficiently wealthy or socially prominent. Held in the Brooklyn Academy’s Assembly Rooms, it was the neighborhood’s premier social event.
A practice of the time was for American heiresses to marry relatively poor European nobility, of whom the best-known example is Jenny Jerome of Cobble Hill and later Manhattan, who married the Duke of Marlborough’s second son, Randolph Churchill, and became the mother of Winston. Two young women who lived on Montague Street (before it became commercial) who became countesses, are good examples; a Miss Kate Parks became Madame de Moussilye and lived in a villa on the Seine, and a Miss Marianne Tardy married an aristocrat and lived in Italy. 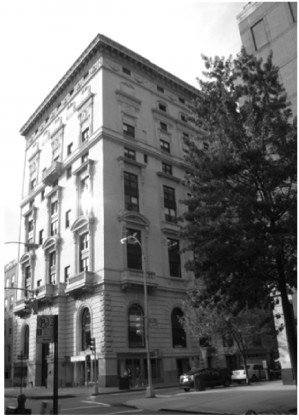 The Crescent or Century Club
The Century Club was founded in 1883 as the Crescent Athletic Club by Harvard and Yale football players who played in Prospect Park. It absorbed the Heights Tennis Club whose courts were at Hicks and Joralemon Streets. The Crescent occupied a building in the Saracenic style on the east side of Clinton Street between Pierrepont and Fulton. It opened a branch at First Avenue and 83rd Street in Bay Ridge that still functions. This building was demolished in 1960 by the urban renewal.
The club built a splendid home on Pierrepont and Clinton Street by Y. Frank Freeman in 1906 and for many years was the epitome of luxury club life, with 2,650 members by 1912. It had a bowling alley, squash courts, a pool, double-height dining room, top-floor gymnasium, library, and rifle range. During World War I, in support of national defense, it opened its rifle range to non-members who wanted to improve their shooting skills. In 1929 it added a branch in Huntington, Long Island. In 1956 it closed this club, but remains in Nassau County as the Huntington Crescent Club. After being used for commercial purposes, including as a bowling alley, this building became St. Ann’s School in 1966. 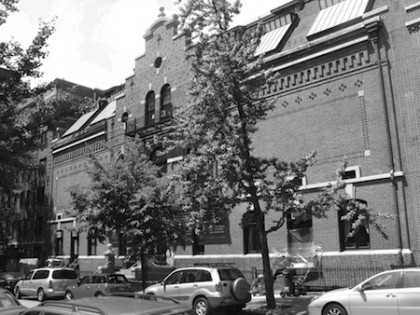 The Heights Casino and Other Clubs
The Heights Casino, at 75 Montague Street, is a squash and tennis club, and hosts numerous tournaments. Designed by Boring and Tilton, who also designed Ellis Island’s immigration buildings, it dates from 1905, and features a Dutch-style stepped gable at its top, intricate brick and iron work, including iron tie rods in the shape of squash rackets. Four

skylights have been re-installed that had previously been removed. The casino sports a restaurant, bar, governors room, lounge and fitness center along with six singles squash courts, one doubles squash court, and two tennis courts (Figure 111). The lower tennis court converts into a ballroom for four hundred people. The apartment building next door, the Casino Apartments at 200 Hicks Street (Figure 108) of 1911, is in a classical style with similar brickwork and features huge apartments. The backyard is shared with 36 Pierrepont Street and features a garden by Alice Recknaygel Ireys, who also created the Fragrance Garden in the Brooklyn Botanic Garden. 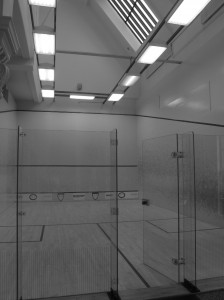 The Yuletide Ball, functioned from 1920 until the late 1960s as a debutante presentation event. In the modern period it has become a fundraiser sponsored by the Brooklyn Kindergarten Society to benefit preschool education for poor children.
The Rembrandt Club for men and Mrs. Fields Literary Club for women still function, although they have never had permanent homes. Both are limited to one hundred members, hold formal dinners, and sponsor cultural events. The Irish poet William Butler Yeats’ first American speech was at Mrs. Field’s. There is also a branch of the Junior League. There was also a Brooklyn Women’s Club, which moved into 114 Pierrepont Street in 1912.
293 Henry Street was the home of the Teachers’ Club in the early twentieth century. There was also a Brooklyn Chess Club at 146 Montague in the early 1900s, along with a Democratic Party club at 201 Montague. The Brooklyn Excelsiors baseball team’s home at 133 Clinton Street evolved into the Excelsior Club by 1874. A few years ago, there was an attempt to organize a chapter of theDaughters of the American Revolution, which is compo-sed of female descendents of participants in the Revolution. The Brooklyn Bar Association makes its home at 123 Remsen Street, the Charles Condon house (formerly 87 Remsen Street).
These posts are from Robert Furman’s forthcoming book “Brooklyn Heights: The Rise, Fall and Rise of America’s First Suburb,” to be published this fall.  Preview copies are now available for $50.00 postpaid on CD as pdfs.  Send check or money order to Mr. Furman at P.O. Box 23365, Brooklyn, N.Y. 11202.  Be the first to see this important book!
Share this Story: