One of the largest employers in the Heights was photographic equipment manufacturer F. Wesel Manufacturing. The magazine the Inland Printer and Lithographer reported in 1901 that the business was founded by German immigrant Ferdinand Wesel in Manhattan in 1880. 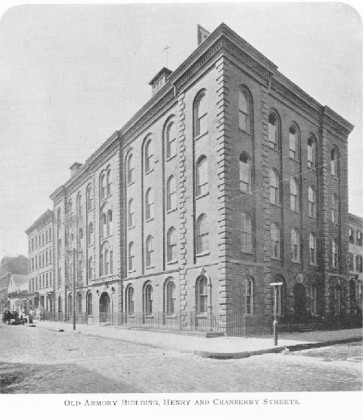 He purchased the old Armory building in 1892, the two factories shown (photo above) in 1897, and another at 96 or 98 Cranberry Street (photo below) in1899. He used his Manhattan property for sales and executive offices. The company moved to the Scranton/Wilkes-Barre, Pennsylvania area in the early to mid-twentieth century. 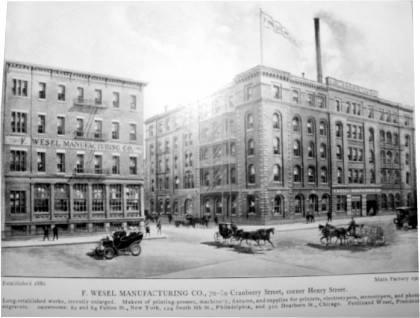 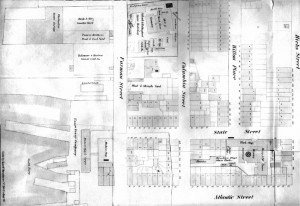 A glass works was founded on what would become State Street around 1730 by Lodewyk Bamper. In 1823 it was owned by John L. Gilliland, as shown on the 1827 Hooker map (left). It made bowls, glasses and other hollowware. This company became the South Ferry Glass Works in 1840 (ferry service having begun in 1837), and in 1855, that site, by then the northern half of the block bounded by Atlantic Street (Avenue), Hicks, Columbia and State Streets, housed Gilliland’s Brooklyn Flint Glass Works, mostly fronting on State, according to the Perris map, making first Irish-type crystal and later Venetian-style glass.

Elias Hungerford patented a process to make blinds out of colored translucent glass and contracted with the works to manufacture it. In 1864 Amory Houghton, Sr. bought the company from Gilliland and in 1868 was persuaded by Hungerford and his investors to move to Corning, New York, thus giving birth to the Corning Glass Company. Fine examples of the Brooklyn company’s work are preserved in the Corning Glass Museum and may be seen in its various publications. The 1886 map shows the site as vacant, but indicates where the works were.

Save Engine 205 Rally on Thursday
Mr. J. Takes a Stroll on Garden Place