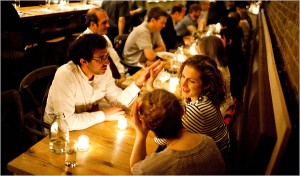 The New York Times reviews Colonie [127 Atlantic Avenue] and awards it one star. The review, by Heights native Sam Sifton, is mixed and throws an elbow at what the writer feels is uneven service.  On different note,  BHB reader/pumpkin carver of Grace Court Alley Peter Steinberg and his wife (whose wedding we covered here) are the folks in the NYT photo. Steinberg tells us he “loves” the restaurant.

“Meh”/one star review aside – most BHB readers have given Colonie positive reviews – we thought you’d enjoy a couple of non-food related passages from the piece:

NY Times: Residents who run into one another at the Variety Mart on Montague Street speak fondly of Noodle Pudding and Henry’s End, both on Henry Street, or Jack the Horse on Hicks Street, where the liquor store once was. They sing songs to the memory of Bouillabaisse on Atlantic Avenue.

But for celebrations and date nights, for art and excitement and fun, they more often walk down to Cobble Hill, Carroll Gardens or Vinegar Hill or descend into the Clark Street station or the labyrinthine corridors of Borough Hall, and take a subway elsewhere to dine….

….Brooklyn Heights was one of Manhattan’s first suburbs, which explains something about the neighborhood’s reputation as a culinary backwater. It has been gentrified for many more years than most neighborhoods in north Brooklyn. People eat at home in their impressive brownstones. It gets late fast there.

Colonie, with all its strengths, would do well to embrace that realization and with it a truthJohn Cheever milled for years in his short stories set in Shady Hill: After Daddy’s off the train, he does not want to wait for dinner.