A Botanical Tour of Brooklyn Heights

On Thursday, your correspondent joined fifteen or so others for a tour of plant life in the Heights, led by Promenade Gardener Jonathan Landsman (photo) and funded by the Promenade Partnership. Jonathan was joined as a guide by Parks Department arborist Matt Grailich. Also present for the tour was Mary Frost of the Eagle, whose account is well worth reading. Following the jump are photos and text documenting the tour. 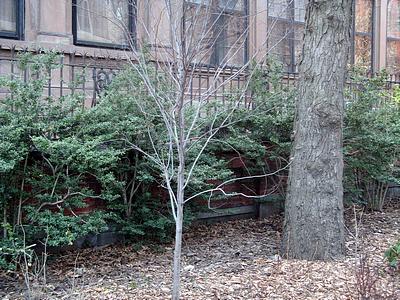 This butterflies cucumbertree magnolia (Magnolia acuminata) is on the north side of the Montague Street entrance to the Promenade. It was planted by the Promenade Partnership last year, and will bloom for the first time this spring. 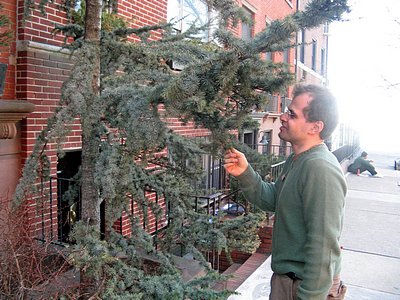 Here is an atlas cedar (Cedrus atlantica ‘Glauca’) growing in a box in front of 14 Remsen Street. 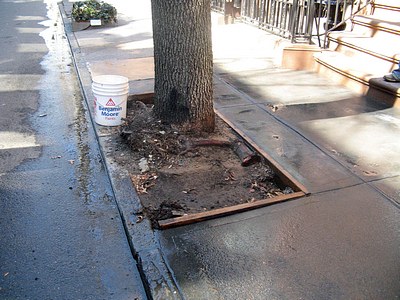 Matt pointed out the girdling roots around the trunk of this pear tree on Remsen Street. This may have been caused by its having been constrained in burlap during its time as nursery stock or by poor root pruning, and could lead to to the tree’s early death by preventing nourishment from reaching its branches and leaves. 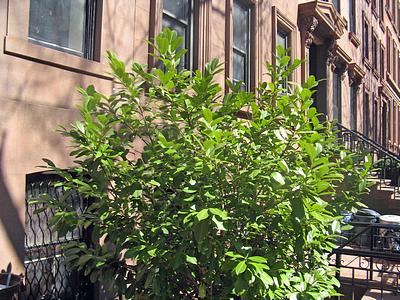 This is a cherrylaurel (Prunus laurocerasus likely ‘Schipkaensis’) on Remsen Street west of Hicks. According to Jonathan, this is “a useful plant with fine specimens around the Heights.” 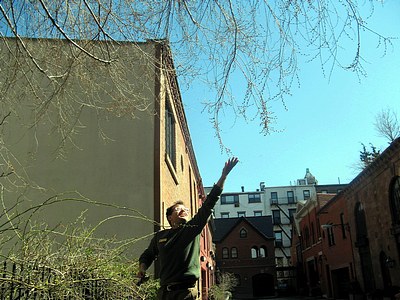 Jonathan reaches for a twig to show the tiny blossoms of what Matt identified as a Siberian elm (Ulmus pumila L.) which grows in the garden behind 76 Remsen Street and arches over part of Grace Court Alley. In prairie regions of the Midwest and West, this species is regarded as an invasive pest, but in the Heights it poses no danger. 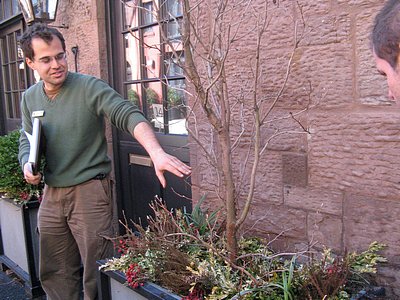 Here is a Japanese stewartia (Stewartia pseudocamellia); one of two of these rare trees growing outside 14 Grace Court Alley. They should flower in July. 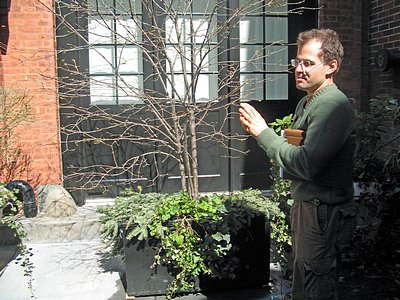 This is a sweetbay magnolia (Magnolia virginiana), which Mary in her Eagle story calls the “scratch and sniff” tree. It grows outside 19 Grace Court Alley. 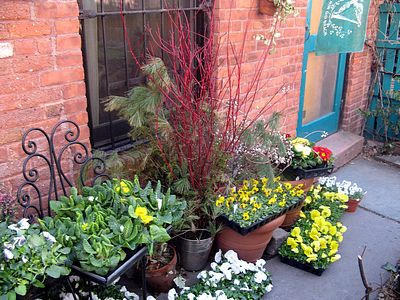 On Joralemon Street just west of Hicks, we paused to admire the stock of award-winning garden designer Catherine Fitzsimmons. 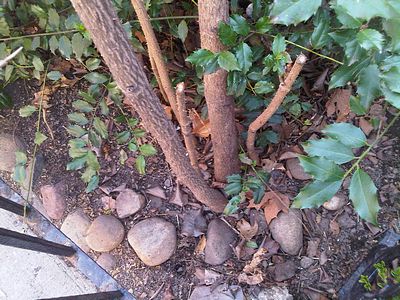 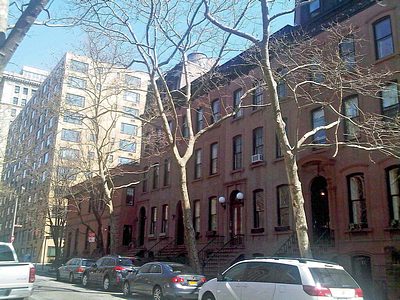 These London plane trees (Platanus x acerifolia) on Hicks Street between Joralemon and Grace Court Alley demonstrate a common trait of street trees: phototropism, or, the tendency to grow toward sources of light. London planes are among the most popular of New York City street trees. 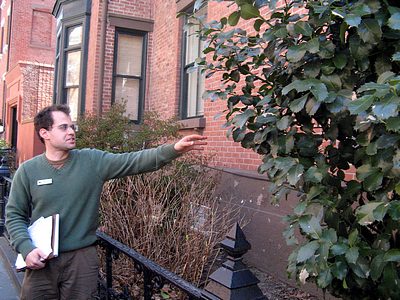 Varieties of holly (Ilex spp.) are found throughout the Heights. This specimen is at the southeast corner of Henry and Joralemon streets. 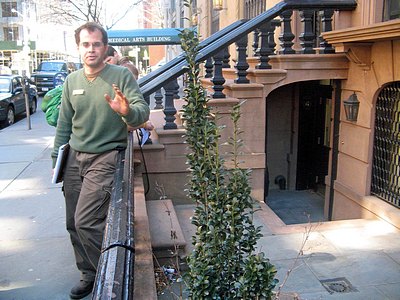 Here, on Joralemon between Clinton and Henry, is another kind of holly; one that strongly resembles boxwood. Update: Flatbush Gardener comments: “The ‘holly that resembles a boxwood’ is likely Ilex crenata, a Japanese species available in many different cultivars, horticultural forms selected for their growth characteristics.” (Lots of Japanese plants in the Heights–there are two more coming below.) He also reminds us that Sustainable Flatbush will be having a street tree walking tour on Sunday, April 17. 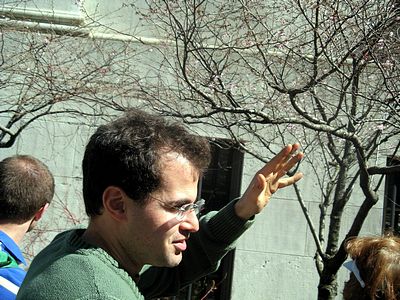 Jonathan describes the “interesting experience” this Japanese Yoshino cherry tree (Prunus x yedoensis) near the northwest corner of Borough Hall had last fall: a spell of warm weather fooled it into thinking it was spring, and it bloomed out of season. 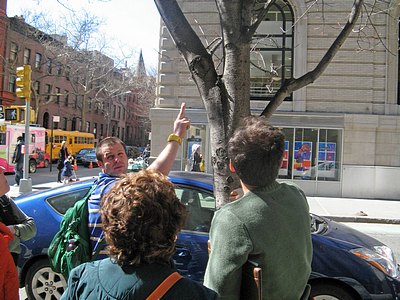 Matt points out the bark ridge at the junction of trunk and branch of this red maple tree at the corner of Pierrtpont and Clinton streets. 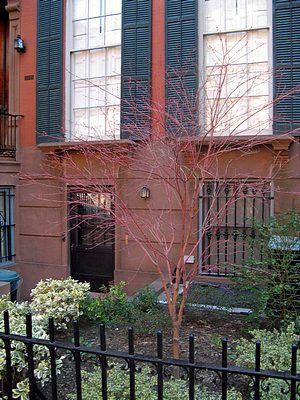 This small tree growing in front of 12 Monroe Place is a Japanese maple (Acer palamatum ‘Sangu Kaku’ or ‘Senkaki’). 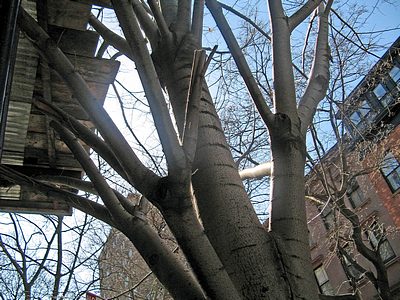 The unkindest cut? Limbs were cut from this tree to make room for a sidewalk bridge erected during renovation work on a townhouse. The contractor, however, did a poor job, as indicated by the bark peeled back from the stump of the limb near the center of the photo. 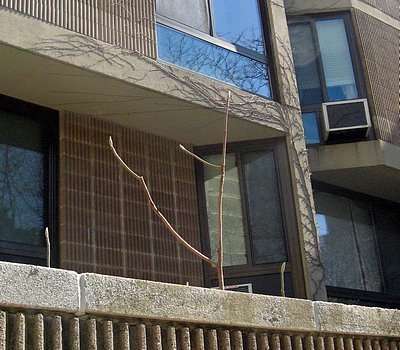 This unprepossessing looking plant, still bare and stark against a background of brutalist architecture, is a bigleaf magnolia (Magnolia macrophylla). Located near the corner of Monroe Place and Clark Street, it should blossom with large, showy but short-lived flowers later in spring. 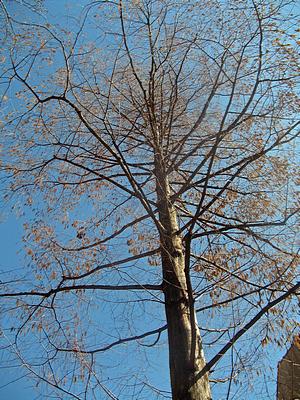 Here is a surviving example in the Heights of the dawn redwood (Metasequoia glyptostroboides), growing in the garden between 151 and 155 Willow Street. This tree was known to western science only from fossils until 1941, when a living specimen was found in China. Jonathan pointed out that this is an example of a deciduous conifer; that is, a cone-bearing tree that sheds its foliage in autumn. He also said that deciduous plants are more efficient than evergreens, because of the energy the latter need to maintain their foliage through the winter. 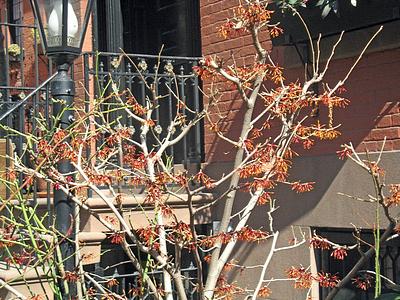 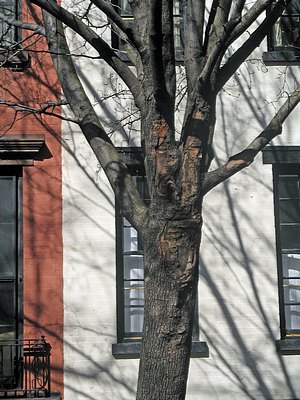 A common hazard for street trees in the Heights is damage from impact by trucks. The scars on the trunk of this tree on Willow Street attest to such damage. 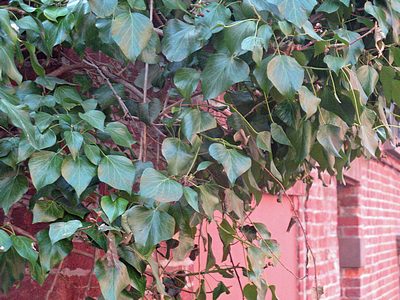 Plants exhibit stages of life. This is a mature section of English ivy (Hedera helix) growing outside 159 Willow Street. Below is an immature section at the same location. Note the different shapes of the leaves. 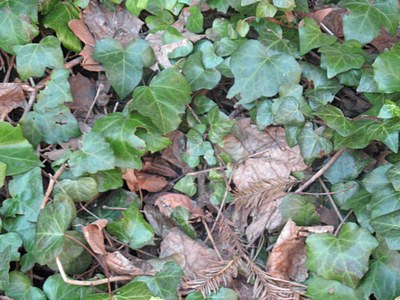 Addendum: Matt has an interesting suggestion in his second comment below:

Choose at least one species of tree or ornamental planting to observe and document with pictures. Next, choose one easily accessible location where pictures can be taken from the same position at the same time on a consistent basis (every morning at 10:30 am, every third day at 6:00 pm, etc.). Your schedule should allow for you to photograph your subjects at least three times each week. Start as soon as possible and continue with the routine beyond maximum foliar expansion. Afterwards, go back and compare your pictures (a slideshow is the best way, if possible), and really take notice of the development displayed from one photo to the next. Some of you may be surprised; some of you may receive affirmation; some of you may learn a thing or two; and, I’m sure everyone will enjoy the project.

If you do this, and would like to see it posted on BHB, we will be delighted to arrange it.