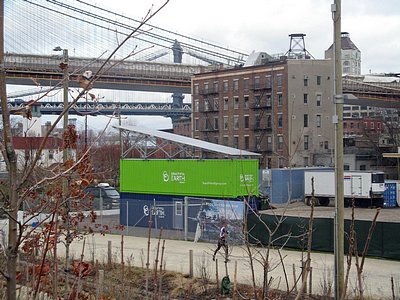 According to Beautiful Earth, use of this station will save the Park “more than $200,000 in gasoline costs, and tens of thousands of dollars in electricity costs, over the 25-year lifetime of the project.” The Park’s use of the solar charging station and electric vehicles will, in combination, result in a significant reduction in CO2 emissions, compared to what would be emitted if fossil fuel powered vehicles were used.

Update: Amanda Cleary of Beautiful Earth sends us this clarification:

I noticed you had a comment about our claim regarding this station being the first of its kind in NYC. This is the same station that we built back in 2009 on a vacant industrial lot in Red Hook- it was used to power our MINI E (which has een charged solely with solar power). We are big fans of the Park and admire the efforts made to keep development as sustainable as possible. After meeting with park directors, we were told they would be using EVs for security and maintenance vehicles (Toros and GEMs). Since the station is completely modular (can be deconstructed and reconstructed in a day or two), we thought the park, only a short distance from our Brooklyn-based office, would be the perfect new home for our project. It will reduce emissions in the park, and will serve as an educational tool for the Conservancy.
Please let me know if you have any questions regarding the station. I would be happy to discuss any information with you.
We have only recently announced this donation due to the fact that we wanted to make sure the station was fully operational for the Park’s employees before releasing all the details. They have been successfully charging emissions-free for several months now!

(Photos by C. Scales for BHB.)