Hermia’s M.O. is to slyly nip another dog’s ball and run along side whatever scrumble occurs, barking with the ball in her mouth. Pickering is the happiest dog alive. He’s happy to chase balls, happy to chase and wrestle, happy to play tug-of-war, happy to eat sticks.

This, then, is my set-up: throw-the-ball-throw-the-ball for Daisy, keep Picks out of the wood chips, police Hermia. 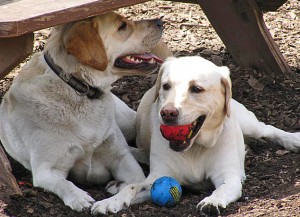 “Can’t you just take it from her mouth?” a woman wanting Hermia to give up her golden’s Cuz asked.
I stood up and shrugged. “Go ahead,” I said. “Take it.”
The Cuz squealed loudly.
I shrugged and went off in search of a ball Hermia would trade the Cuz for.

Today a very young pit bull made her debut at the Hill, wired, jumping on everyone and every dog, running after Daisy running after her ball, only to stop half-way and run after a Springer. Her humans kept intervening in her explorations of crotches and backpacks, her scuffle with a fellow youngster, and her approach to a mature pit that seemed interested in imparting some pit wisdom to the neophyte.
“Put your knee up when she jumps,” they.

“Anyone who expects to be clean when they leave here deserves what they get,” I told them. “It’s the dog run. She’s allowed to jump.”

What I should have said is that she was too excited with her freedom and newness of scents, humans games and, above all, dogs, to re-inforce training. She was barely a foot tall. She could leap a mile, but she’d meet my foot, not my knee, and that’s a much more threatening piece of anatomy.
Mostly, she needed to test herself against the younger dogs, get bossed by the older dogs, follow the ball chasers. That’s how puppies learn.

One couple left the Hill in clean clothes, the owners of two huskies. The huskies joined my gang with the unfortunate result that they stole our balls and we had to wait until we could swipe them back. They were depriving Hermia, Daisy and Pickering of their play.

What was pitiful was that their humans were sitting under the pear blossoms, watching. Those huskies were hungry – literally hungry – to chase and catch, and they were old enough that their owners must know this. Why didn’t they bring balls and a Chuck-it so that they could bond with their dogs by providing the ecstasy of the chase? Why risk my dogs taking umbrage at robbery?

I felt sorry for the pit that needed an unfettered field of exploration. I felt sorrier for the huskies. They needed their humans’ involvement so that they, too, would leave hot, tired, grateful and smiling from the hour of freedom to be themselves.

Confessions of a Lab Lady

Brooklyn Heights Buds
Will Marty Bully Kid Off the Ballot?