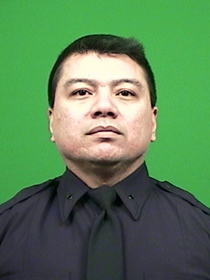 Police Officer Alain Schaberger, 42, assigned to the 84th Precinct, lost his life early this morning after being pushed over the railing of a stairwell by a suspect at 45 St. Marks Pl.  Police say that Schaberger responded to a 911 call at 334 Bergen St. at 4:22 this morning in which a woman reported her boyfriend, George Villanueva, had threatened to kill her before he fled to his residence on St. Marks Pl.  Officers responded to Villanueva’s residence, where they led him down the front stoop to have the victim identify him.  Villanueva began struggling with the officers, and Schaberger was pushed over the railing.

“Officer Schaberger fell approximately nine feet, striking his head on cement and landing feet up.  He had a gash on the left side of his head, his neck was broken,” said Police Commissioner Ray Kelly.  He was taken to Lutheran Medical Center where he was pronounced dead a short time later.

The Daily News reports Schaberger was a well-respected member of the department, and a veteran of the U.S. Navy.

Commissioner Kelly said that Villanueva was the subject of 12 prior domestic complaints, and has 28 prior arrests for robbery and burglary.  His last stint in state prison ended in 2005.