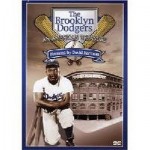 For the next three Sundays, February 20 and 27, and March 6, starting at 2:00 p.m., the Brooklyn Historical Society, 128 Pierrepont Street (corner of Clinton) will present films about the long departed and (by some of us, still) lamented Brooklyn Dodgers. The screenings are free with museum admission, which is $6 for adults, $4 for seniors, children over 12 (under 12 are free) and teachers, and free for BHS members. A schedule, and descriptions of the films, follows the jump.

This film chronicles the Brooklyn Dodgers from their beginnings in the 1880’s through that sad day in 1957 when they left Brooklyn. Owned by Walter O’Malley, the Dodgers appeared in nine World Series while in Brooklyn, finally winning their only World Championship, against the Yankees, in 1955. Known for their tendency to lose the pennant on the last day of the season, the Dodgers are remembered for creating one of the most meaningful events, when in 1947 Branch Rickey signed Jackie Robinson, thereby breaking the color barrier in professional sports. Experience the dynamic history of the Brooklyn Dodgers through this important film featuring some of the most memorable players in baseball.

This film tells the true story of how baseball-great Jackie Robinson fought racial discrimination and broke the color barrier in baseball. Jackie Robinson stars as himself in this biographical film that recounts his youth, success at UCLA, military service, Negro League experience and his extraordinary achievement at becoming the first African-American player in major league baseball. The film co-stars Ruby Dee, Minor Watson and Louise Beavers.

March 6: Dem Bums: The History of the Brooklyn Dodgers (75 minutes).

This is a moving documentary about the beloved Brooklyn Dodgers, considered by many to be the team of the ordinary man. This film consists of several episodic sections that recount the team’s early beginnings in Brooklyn, the Golden Era of New York Baseball from 1947-1957, and their heartbreaking move to Los Angeles in 1958. Throughout the documentary there is original footage, player interviews and a behind-the-scenes look into life in the clubhouse. Produced by the same company that made The Brooklyn Dodgers: An American Treasure, this documentary delivers a more in-depth look at this treasured team. The players of the Brooklyn Dodgers were a spectacular group of athletes and are continue to be bitterly missed by their fans. Dem Bums is an excellent and entertaining documentary, worthy of being watched over and over.

These films are being presented in conjunction with BHS’s exhibit Home Base: Memories of the Brooklyn Dodgers at Ebbets Field.